Similarly, it is now possible to create applications with ActiveReports targeting .NET Core 3, which is the desktop pack of .NET Core. The benefit of these desktop applications is that they can run on Linux and MacOS in addition to Windows.

We have published our assemblies on NuGet to make it easier for developers to get updates, service packs, and bug fixes. However, we will continue to provide installers for all our major and minor releases.

AcroForms (Acrobat Forms) are PDF documents with interactive fields, such as textboxes and checkboxes, that can be used to create PDF forms as seen below:

To create such forms in ActiveReports 14, you will use the new InputField control and set its InputType property to either ‘Text’ or ‘CheckBox.’

You also have the ability to make this a ‘Required’ field, enable spellchecking, or mask user-entered content with asterisks (*) using the ‘Password’ boolean property.

We’ve made several improvements to our Web Designer that will ease your workload.

You no longer have to create a custom dataset for Sue, another for Alan, and a third for Jack so they can access their desired data. We’ve added backend logic to the web designer so your end users can create their own data source connections and data sets (in the same intuitive design as before) and validate them. Of course, these are only options. After all, you decide whether or not your end users can create data sources and data sets.

To use your existing .rpx reports (section reports) in the web designer, you can convert them using our Import Wizard. This will recreate your section report as RDLX and place its content in the BandedList control.

Please take a look at this page for more information and applicable limitations.

The Web Designer has been a popular component since its introduction. We have been asked about custom localization, and it is included in ActiveReports 14. If you need to localize the Web Designer, you can do so by passing a resource file containing your translations.

In ActiveReports 14, we have created a new report viewer control for the web. This is based on JavaScript technologies and can be used in ASP. NET or ASP. NET Core. The WebViewer can be used with multiple view types: HTML, PDF, or Raw HTML. Of course, it supports all of our report types and export formats. This viewer brings you more functional benefits than our previous ASP. NET Viewer control such as support for themes, integrated text search functionality, and is responsive. 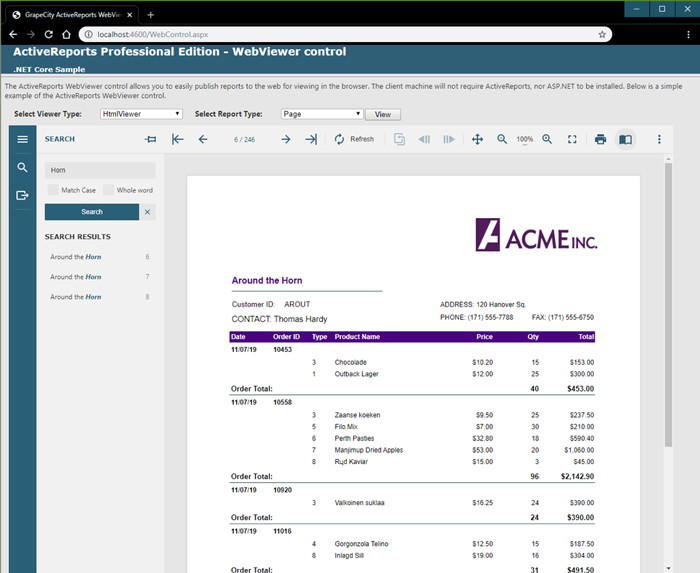 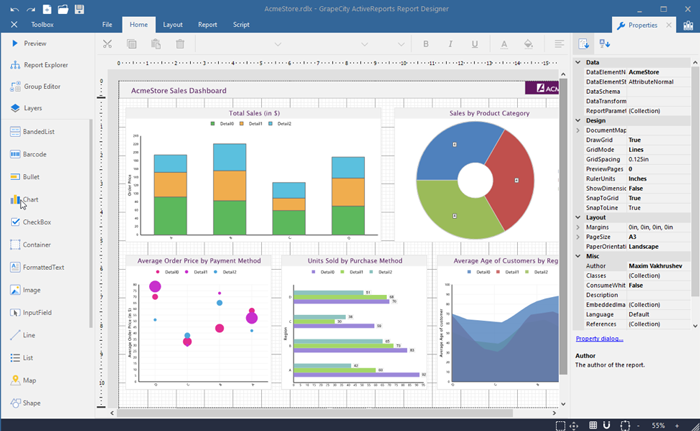 The JSViewer is a JavaScript report viewer. It can be used in ASP. NET, ASP. NET Core, Angular, Vue, or React applications. In ActiveReports 14, we’ve improved our JSViewer in several ways. First, we’ve added a text search functionality that scans your reports and returns matches and page numbers.

Secondly, localization is now supported. You can localize the JSViewer to a certain culture or locale. We’ve also added one-touch printing. Now, you can print the report at the same time the report is loaded into the JSViewer. Or, you might only want to print without displaying the report.