A Tablix report item is a data region similar to Excel Pivot Tables. The tablix condenses bound data records into groups and arranges unique values of these groups, known as Group Instances, in horizontal(Column Groups) and vertical(Row Groups) directions. The intersection of a Row and Column Group displays one or more summary values. For example, in the report output from the Get Started With Summary Reports walkthrough, Row Groups display store names, Column Groups display years and their intersections show the Net Sales for each store in each year.

In addition, the Tablix can sort and filter the data based on pre-defined conditions or user input.

You can add a Tablix into a report by either double-click the corresponding item in the toolbox or drag-and-drop it to a report page area.

If you set up the Data Binding, which we recommend beginning any report creation with, then after adding a new tablix, it displays the dialog, known as Tablix Wizard that allows you to instantly configure Row Groups, Column Groups, Summary Values, and various layout options.

The wizard dialog displays available data sets on its left side. You can drag-and-drop fields from one of these data sets into the Row Groups, Column Groups, and Values areas.

The Filters button located on the right side of the Layout Options area allows you to add conditions under which the tablix will filter the displayed data.

Unique values of Rows and Columns fields generate row and column Group Instances, respectively. You can filter and sort group instances and apply formatting to their values using the corresponding drop-down buttons on a field name's right side. The Swap button exchanges row groups for column groups.

You can add more than one field into Row and Column groups creating hierarchical structures. For instance, the Drill-down Tablix has the following configuration.

The fields in the Values area determine the summary values displayed in row and column group instances intersections. You can specify the aggregate function, such as Sum, Count, or Average, and the formatting of a summary value using buttons on the right side of its name. In addition, the Display As drop-down allows you to specify an advanced formula of the summary value. Supported values are:

Multiple summary values can arrange horizontally, the default option, or vertically, which can be achieved by turning on the As Rows switch.

For instance, the Tablix with Multiple Values has two summary values to display sales channels' contribution to the sales of product categories using the absolute value and the percentage share. To achieve that, we added the SalesAmount in the Values area twice, set the Sum aggregate function for both of them, set the Currency formatting for the second value, and then selected the % of Column Group Total in the first value's Display As drop-down.

The Totals tab in the Layout Options section lets you quickly set up the appearance of Grand Totals and Subtotals for column and row groups:

The Organization tab in the Layout Options section lets you configure the interactive features of a tablix.

In most cases, after you finished the initial configuration of a tablix and closed the Wizard Dialog, you can re-open it later to adjust the settings. However, for advanced scenarios the Wizard can't handle the tablix structure and displays the corresponding warning.

Once you closed the Wizard Dialog, the tablix configuration can be set up using the designer. The following diagram depicts the default structure of the Tablix Designer that appears if you click anywhere inside its bounding box. 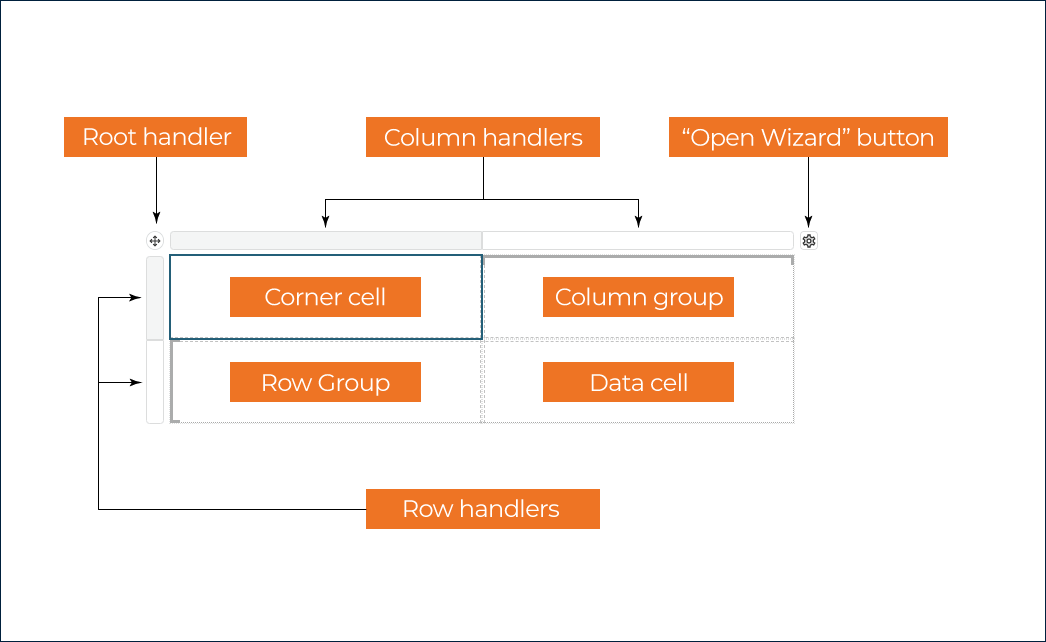 A Tablix Corner is located in the upper-left corner, or upper-right corner if a tablix has the Layout Direction is set to Rtl.

The layout direction applies at preview-time only, though.

This area is automatically expanded horizontally or vertically when you add new column or row groups. You can merge cells inside the tablix corner and insert a data visualizer such as a TextBox or Image.

To merge cells, select them holding the Ctrl button on Windows or Cmd on Mac OS, then right-click the selection and choose the Cells > Merge Cells item in the context menu.

A Row is a horizontal group of Cells within a Tablix. If you left-click a row handler, it automatically selects all the report items in the row's cells and the Properties panel shows two tabs. The Row tab exposes the Height in Length units that determines the initial height of tablix cells within a row. However, cells can grow or shrink in height at preview-time. Check the CanGrow and CanShrink properties of a TextBox report item for more information.

The additional tab lets you modify the properties of all the row's report items simultaneously. In the most common scenario, the extra tab is called TEXTBOX and changes all the row's textboxes' properties.

A Column is a vertical group of Cells within a Tablix. If you left-click a column handler, it automatically selects all the report items in the column's cells and the Properties panel shows two tabs. The Column tab exposes the Width in Length units that determines the width of tablix cells within a column.

The tablix designer marks row and column groups with square brackets. If you click the cell on the right side or underneath a square bracket, the properties panel loads the configuration of the corresponding row or column group in the Tablix Member tab.

The Sort Expressions property of a row or column group is the collection of items that allows you to sort group instances. Each item consists of the expression and the sort direction. For instance, the Group_SalesYear row group in the Advanced Tablix, group has the {SalesYear} sort expression and ascending order. Consequently, years appear chronologically at preview time.

Initially, a tablix group consists of the single cell on the intersection of a row and column. You can add new columns and rows inside or outside a group. In the former scenario, newly added cells repeat once per group instance. In the latter, they repeat once per group.

For example, to add column headers into the Tablix with Multiple Values we could take the following steps.

Row and Columns groups can be arranged hierarchically. For example, in the Tablix with Static Columns, the Group_SalesChannel row group has the child Group_ProductCategory group.

Also, groups can be adjacent as the Group_SalesYear and Group_SalesChannel row groups in the Advanced Tablix.

To insert a child, parent, or adjacent group right click the cell on the right side or underneath a square bracket in the tablix designer and select the corresponding item in the Row Group or Column Group menu. 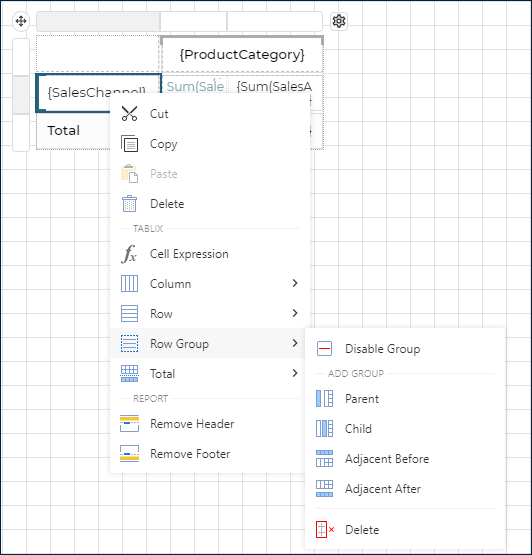 The same menu allows you to delete or disable a group.

Alternatively, you can use the Group Editor to insert remove, disable groups or load their configuration into the properties panel. The group editor displays the hierarchy of items known as tablix members. Row and Column groups are marked with square brackets. Other items in the hierarchy marked with vertical lines are static tablix members and they point to cells that contain a static text or total values.

For example, here is the tablix members structure of the Advanced Tablix

In most cases, static tablix members are TextBoxes that you can modify by left-clicking inside the containing tablix cell. The Properties panel displays the TextBox and Tablix Members tabs. You can use the latter to modify the following properties.

A tablix could display two types of totals.

To insert a total row or column in both scenarios, right click the cell on the right side or underneath a square bracket in the tablix designer and select the Total->Add Total Before or Total->Add Total After menu item. If a group does not have the parent, then the grand total will be inserted. Otherwise, the subtotal for the parent group will be created.

To insert additional totals, you can add rows and columns as described in the group layout section and set summary expressions for the newly added cells.