When you are preparing to add ActiveReports.NET to your project, the first step is to determine which licensing type you need. When licensing an AR.NET solution in Visual Studio, there are three main types of licensing: Licensing a Project, Licensing Compiled Code, and Licensing in a Pipeline.

Want the Latest Version of ActiveReports.NET? Download it today!

License for (control name) could not be found

This error typically occurs when there are additional or missing lines in your licenses.licx file. This can be remedied by opening the licenses.licx file and deleting any unused strings, ensuring that the correct strings are added, and ensuring that there are no unnecessary spaces in the file. A list of the licensing strings can be found in the table below and the following documentation.

Using Version Number at the End of Licensing Strings

Occasionally when the licenses.licx file is created automatically, the strings are longer, and include additional values, like this:

These longer strings can cause issues when you update your ActiveReports build, as it looks for that specific version of the file.

You can safely remove these specific version values and set the SpecificVersion property of the ActiveReports references to False. 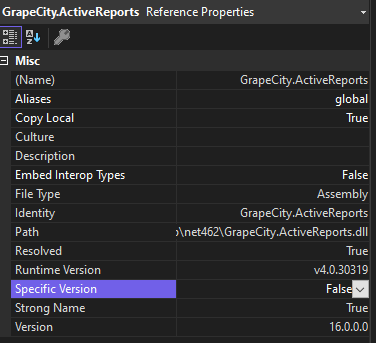 Licenses.licx file is not present in the project

When ActiveReports is embedded in a custom library that is called by another application, or you are using Azure Functions, you will want to generate a .gclicx file.

Follow the steps below to generate a .gclicx file:

To license a project on an Azure Functions application, the command will be as follows:

Errors when debugging in Azure Functions

If you would like to run an Azure Functions App in debug mode, then some alterations will need to be made to the generation of the. gclicx file. When debugging in Azure Functions the project is opened in an Azure Emulator, thus the entry application name will be different. This entry application will be func, rather than the Microsoft.Azure.WebJobs.Script.WebHost so we will want to change the following line from:

Licensing in a Pipeline

If you have any specific questions regarding Licensing, feel free to reach out to our support team and create a ticket.

Want the Latest Version of ActiveReports.NET? Download it today!