Microsoft is previewing a new version of Visual Studio which is tentatively titled Visual Studio 15. The IDE is now in its fifth preview version, and it has some small but noticeable improvements over Visual Studio 2015. In this article, we'll take a look at how you can get it, and some of the changes it brings.

Trying out the Preview

The current preview is available directly from Microsoft. They have a FAQ that also contains download link available here here on their site. This initial download will kick off an improved installation process.

One really welcome change is the new install screen in Visual Studio 15. It’s nice to see Xamarin integrated deeper into the IDE’s UI at this early stage. The new UI makes it much more clear what your different platform options are, and exactly what’s being installed by each. 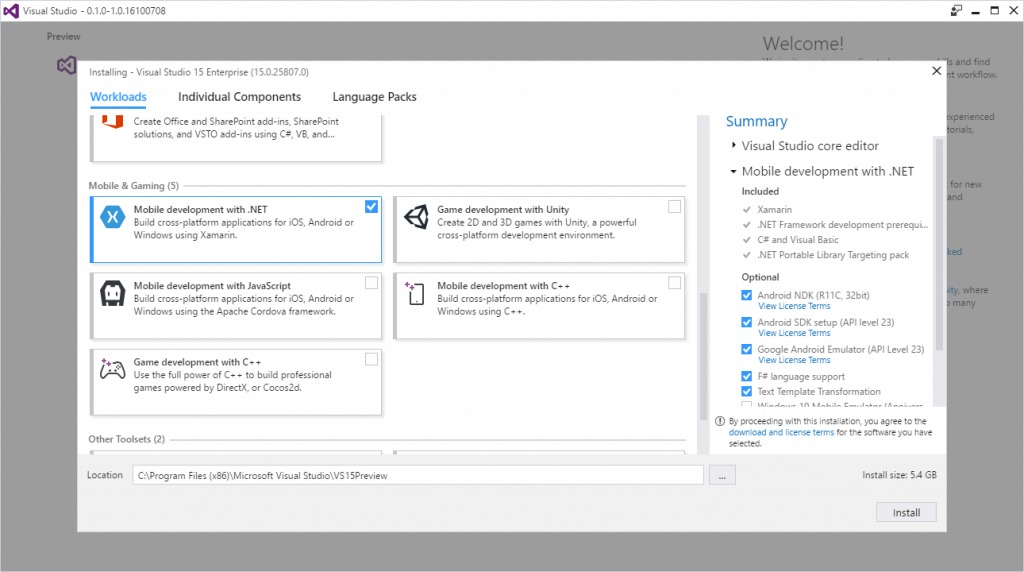 The installation itself was somewhat faster too. I found that installing Xamarin and UWP (a likely scenario for many) took about an hour which was a little faster than installers in the past. Microsoft claims that certain installations can be even fast than that.

The Visual Studio 15 Preview generally seemed to perform well under most circumstances. Loading solutions is a little faster than it’s been in the past which is a nice improvement. Launching the IDE also seemed a little snappier than it was with 2015. Microsoft claims that they’re made a lot of under-the-hood improvements in the new version, and it definitely feels faster. I didn’t find any of the other changes to have a particularly large effect on the average Xamarin user, though there were a couple of nice time savers. One of my favorites was that you can connect and check out from TFS on the main Start Page which saves you a few clicks. Strings can also be split to a new line just by pressing the Enter key which is another nice improvement. There are also improvements to intellisense which, while I didn't notice the change significantly, is something Microsoft is pushing as a big improvement for some C# users. Also, XAML is more consistently editable when you're doing debugging which is another notable improvement.

I left my Visual Studio 2015 installation installed concurrently with the preview, and I did notice some issues with trying to use both versions at the same time with Xamarin. Projects would often load fine in one IDE, but I be unavailable in the other. It seems though the two installations don’t play nice with one another at this stage. If you’re interesting in trying the preview out, I’d recommend doing so in a VM or other clean environment just to avoid any conflicts. The update looks promising, but the preview is best left for those who are adventurous.