Type "Winforms WPF" in a Google Search and you will be transported to the universe of WPF-WinForms rivalry. You'll find developers discussing the relevance of the two, quoting curses and praises for both. Don't be surprised if you see WPF basking in the glory that is has found so quickly, or WinForms with its aged and improved techniques walking with pride. It is impossible to predict which one will be standing atop the peak once the race starts. Both with their own pros and cons are a realm in their own.

WinForms and WPF are two different technologies in the .NET Framework Stack. Where WinForms lacks in flexibility and vibrant user interface, it makes up in maturity and total available support. However, it is seen time to time, that developers are porting applications from one technology to another, for the sake of better features and ease of development. At this time of changing trends, it is worth mentioning a very simple method. Through this, a WPF control can be created and embedded in a WinForms application. This way with maturity of WinForms, we can have the looks and flexibility of WPF. 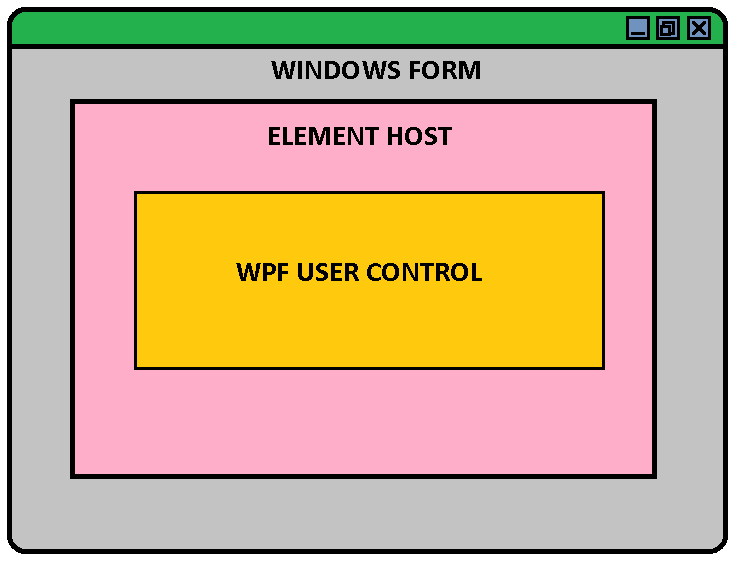 Create a WinForms project named HostWPFControlInWinForms in Visual Studio. 1. Add ElementHost control To add ElementHost control, you would need to add System.Windows.Forms.Integration namespace. To add the reference to the namespace, right click References in Solution Explorer and select Add References. Select WindowsFormsIntegration.dll from Assemblies>Framework (in VS 2012 +) or from .NET Tab (in VS 2010). 2. Create a WPF UserControl In the Solution Explorer of the project, right click on project node and select Add>New Item. Select UserControl (WPF) and create your own UserControl named "WPFBrowseBar.xaml". A file WPFBrowseBar.xaml will open. Replace the XAML code with the code given below: XAML:

Right click the UserControl and go to code or press F7. Replace the class with the following snippet: