While creating TrueDBGrid it was decided that the control would be light weight, efficient and feature packed. However, it was worthwhile to note that light and feature packed are usually contrary to each other. This was the initial difficulty that we faced, deciding feature over efficiency. Our developers later decided that we won't let this dilemma ruin the development of TrueDBGrid. They replaced a feature heavy control with a flexible and versatile control. This vision was something which made TrueDBGrid a very special control for us. Let us ponder on one such example. A few months ago, a very simplistic request came to us. The response to this was equally simple and affirmative. This affirmation was result of a vision that predicted the need of flexibility and versatility while developing TrueDBGrid. The question of the day was how do we embed a control in a bounded grid which is not part of the control suite - "How do we embed a Checked ComboBox in TrueDBGrid cell?" Now, a Checked ComboBox is not a standard control, i.e. Microsoft does not provide us with a Checked ComboBox. Does that mean it is not at all possible to implement??

No, it does not mean that!!

Step 3: Add the control to the grid A very simple code snippet can be used to add this complex control as an editor for a column in TrueDBGrid.

And, here is what we achieved. 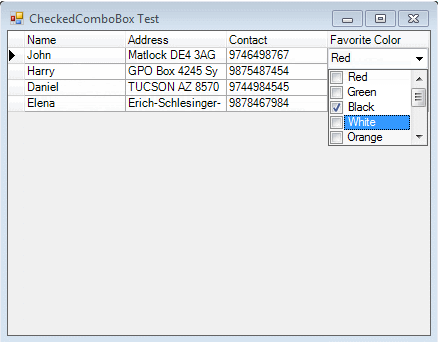