Since WPF's first release, people keep discussing whether its performance is comparable with WinForms, or whether this platform will eventually die. Now we're seeing the same questions about UWP. Let's try to answer with actual data about our FlexGrid performance.

WinForms is the oldest desktop platform in .NET stack. While Microsoft hasn't released many big changes, it's stable and comparable with latest OS versions, and it's still one of the most popular platforms for .NET development. WPF platform is newer than WinForms and still evolving. At the end of 2014, Microsoft announced WPF roadmap, which focused on quality and performance. And the latest .NET Framework updates prove that they keep moving in this direction: .NET 4.6.1, .NET 4.6.2. UWP is another XAML platform that's being actively developed. Microsoft released several platform updates since the first version, and they're also trying to be more transparent and announced publicly the Windows Platform bug tracker and Windows Platform roadmap. This platform allows you to write applications that can run on any Windows 10 device, including smartphones and tablets. It's much more than desktop, so even if it is new and still has issues, it's promising.

If you need to display tabular data, you can't live without a grid in your application. Data-driven grid controls that are automatically populated based on data source, with sorting, filtering and grouping support, became a standard thing in .NET world. All control vendors have them. Microsoft also ships some basic implementation almost for all platforms. Only UWP doesn't include any datagrid out-of-the-box. We include the FlexGrid control in all our editions. WinForms version is the oldest one. WPF's version is stable and has a lot of extensions. UWP version still has some items in to-do list, but it's already stable and fast.

For the 2017 v1 release, we focused on XAML FlexGrid performance and made significant progress, especially for UWP version. As a part of this job we made performance benchmarks for WPF and UWP datagrids. The full source code of all tests is attached to related blog posts. As soon as we have same tests for all desktop versions, we can try to compare FlexGrid performance on different platforms. Note: it's important to understand limitations of such comparison: 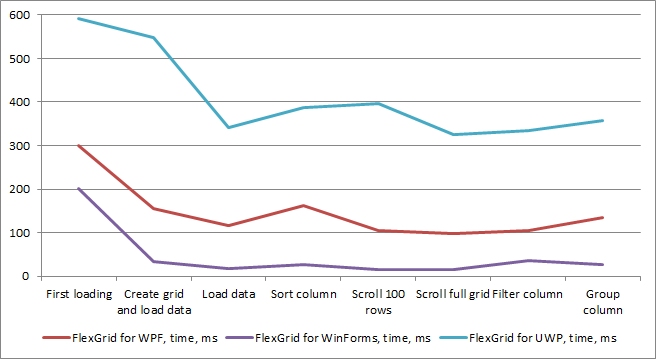