The most powerful feature of any spreadsheet is the formula reference – the syntax for referring to another cell or range of cells in a formula as a simple variable in the formula expression.

Examples of typical use cases for relative references include most tabular data tables like monthly sales by division or product, or subtotals and totals in a balance sheet or financial report.

When the formula is copied to other cells in the column using copy/paste or drag-fill, then only the last row reference changes, which computes the cumulative total.

Workbook references are references to another workbook. These are also sometimes called “external references” because the source is external to the workbook and might not be available, so a cached last-known value is kept in the workbook for use in calculations when the source workbook is not open.

Some examples of formulas containing external workbook references are:

The columns in the table must be named, so is you don’t already have column names in the top row of the cell range, then the columns are named using auto-generated names Column1 and Column2:

Structured references use a special syntax that is much easier to read and understand because it uses the column names.

There are also some pre-defined names for accessing the cells in the table header row and totals row.

Some examples of formulas containing structured references are:

The first two examples above do not include a table name reference and are only valid inside the table cells referencing its columns. The last three examples do include the table name and can be used in cells outside of the table. The ‘@’ specifies a relative reference to the table cells in “this row” in the specified column. The column names can contain spaces and do not need to be enclosed in single-quotes – for example, if a column is names “January Sales” then you can reference it as “[@January Sales]” in a table cell formula.

Some examples of formulas containing structured references to external workbooks are:

You can greatly improve the readability of formulas by replacing explicit references to cell ranges with custom names defined using those ranges instead. Then those formulas can use helpful and descriptive names which can make formula auditing much easier and help to eliminate errors. The name must start with a letter, underscore, or backslash, and must contain only letters, numbers, periods, and underscores.

The name cannot contain embedded space characters and cannot look like a cell reference – for example, “D$5” or “R54C” would not be permitted as these might be confused with range references.

You also cannot use “c” or “r” alone as a name (these are reserved). Names are not case-sensitive in formulas, but you can use naming conventions like camel-casing to initialize the names and improve readability in the Name Manager tool.

Custom names are not limited to named cells and ranges – you can create a custom name for any valid formula expression. All calculation functions are available for use in custom name formulas. Very large and complex calculations can often be broken down into simpler steps that can use custom names, making the formulas much easier to read and understand.

Very complex calculations can be separated into concrete stages using custom names. This is especially helpful in cases where some of those concrete stages can be reused across more than one calculation – for example, using a custom name for tax rate calculations. Custom names also support specifying a comment to document the use and purpose of the name, which the user can see when referencing the name in the formula bar or in the Name Manager tool: 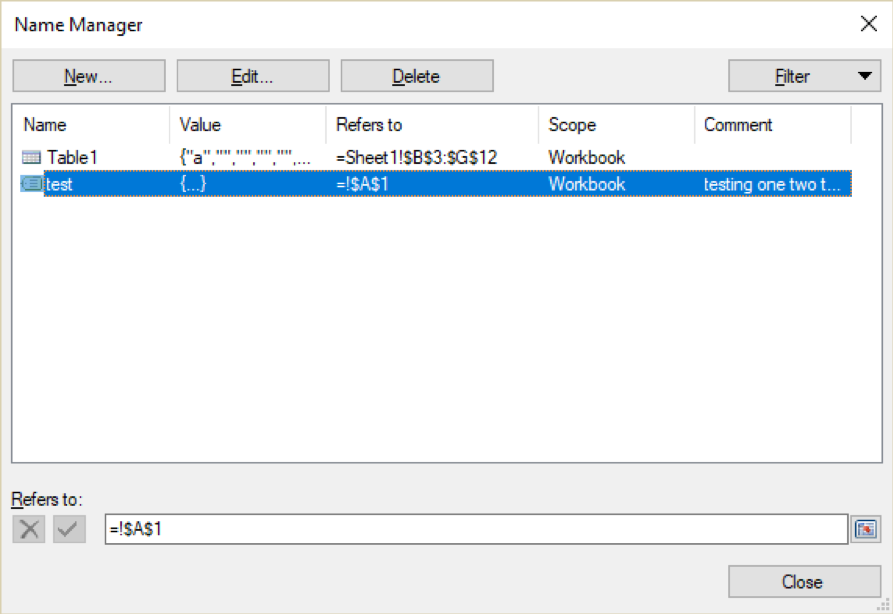 The Name Manager tool shown above is built into the main spreadsheet control binary and available programmatically using simple code:

Custom names can be scoped to either the workbook or the worksheet. This is specified when creating the name – if you are using the user interface then you can select the scope using the drop-down: 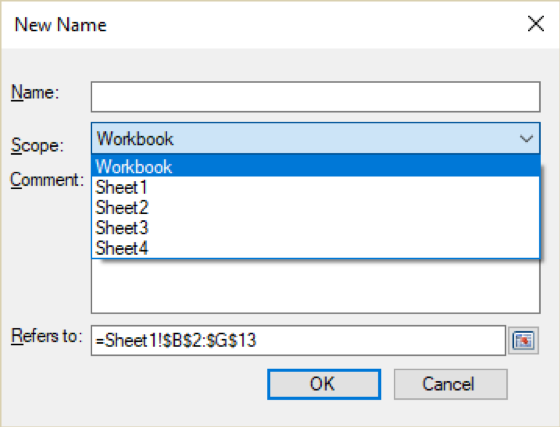 In code, you can specify the scope of the name in the last argument when calling the INames.Add method:

When you add or change a custom name, the specified formula is immediately parsed into a logical expression that represents that formula, and any cells containing formulas using that name will recalculate automatically (if automatic calculation isn’t disabled). When a cell formula contains that name, the formula is calculated as if the name expression replaced the name reference, and all references and functions (for example, ROW()) are evaluated in the context of the particular cell being calculated.

When creating the custom name using the UI “New Name” dialog, the active cell in the active sheet is used to parse the relative references in the formula expression, so all relative references are parsed into relative offsets from that cell – for example, “the cell two rows up and one column to the left” – and when this name is used in a different cell, the referenced cell changes too.

It is sometimes helpful to use relative references in custom names – and I will post such an example later this year – but in general should be avoided unless necessary. When they are used, it is important to note in the comment for the custom name which cell should be active when viewing or editing the formulas using the Name Manager tool, because when other cells are active the formulas will not show or calculate as expected.

Since the external variable operates at workbook-scope, all cell range references must specify the worksheet name(s).

Here is the implementation of the class:

The constructor of TextBoxExternalVariable requires a TextBox control and a flag to indicate whether the text box will be used for input or for output. The TextBox control is kept in a local field and if the input flag is set then an event handler is attached to the TextBox.TextChanged event, which calls the Dirty() method when the text changes.

The code in OnDirtying() returns true when the variable is used for input and ignored otherwise, and the code in Dirtied() calls the Refresh() method, which updates the TextBox.Text with the current value when the input flag is not set.

There is some initialization code required in the form to set up the sample:

In run time, when the value in the first text box changes and fires the TextChanged event, then the second text box immediately updates with the calculated product.