How to Quickly Create an Angular Datagrid in Your Web Application

Datagrids have been one of the most common visual software elements since the advent of UIs themselves. They appeal to the instinct that drives all of us to take in and understand as much data as possible, as quickly as possible. Datagrids are more useful than ever, not only for displaying data but also for editing it.

With automatic conveniences like sorting and autocomplete and advanced features like custom formulas, Microsoft Excel would be the natural choice for most users. Users choose excel because it is familiar.

Although Excel has become the most common example of software using a datagrid, the paradigm has increased throughout the software field. As web apps continue to replace the traditional native applications we're used to, it only makes sense that datagrids would make their way to web app UIs.

Plenty of JavaScript datagrids exist in the market: open-source, third-party, and homegrown. Which to choose?

In another one of our blogs, we discussed what makes datagrids so useful as UI elements and why FlexGrid is the best Angular datagrid. You can see Wijmo's Angular DataGrid in action and learn more about it through our Angular datagrid overview sample.

You can get your copy of Wijmo from NPM, from our CDN, or by downloading it from our site.

All this sounds amazing, right? Let's put FlexGrid to work by building a customizable Angular datagrid in minutes. We'll use the following application to demonstrate how to use FlexGrid with Angular, Google's web framework: Angular Sample App.

We use Stackblitz to create the sample, so it is easy to maintain and share.

How to Create the Angular App

To create your copy of the app, follow these steps: 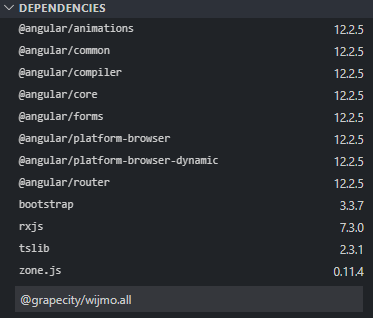 How to Import the Required Modules

We'll start by importing the required classes and styles from Angular and Wijmo:

Notice how, in addition to the modules, the code imports some CSS. In this case, we chose Wijmo's material theme, one of several included with Wijmo.

To style the app, edit the styles.css file as follows:

Our data source will be stored within our app.component.ts file, whichis defined as follows:

The app.component.ts file exposes the data through its "data" property, a CollectionView grouped by make. The data is loaded asynchronously after the component is constructed.

When the data is received, it is assigned to the CollectionView's sourceCollection property and becomes available to the application.

How to Visualize the Data in Angular

The final step is implementing the markup inside of the app.component.html file to render the Angular DataGrid:

The app header contains a short app description and a summary of how many models and makes are displayed. The summary counts are updated automatically when the user filters the data. The header is followed by the "FlexGrid" element, which initializes the grid's properties, including the itemsSource, the columns to display, and their properties.

The column properties include the binding, header, format, and width for each column. Note that the aggregate property on the price column causes the grid to show the average price for each make in the group headers.

The "FlexGrid" element contains a "FlexGridFilter" element, which adds the column filter so that users may filter the grid data by model and price.

We've also included some data bindings connected to the CollectionView, which we use to show how many makes and models are being displayed in the FlexGrid, based on the filters the user has applied.

How to Run the Application 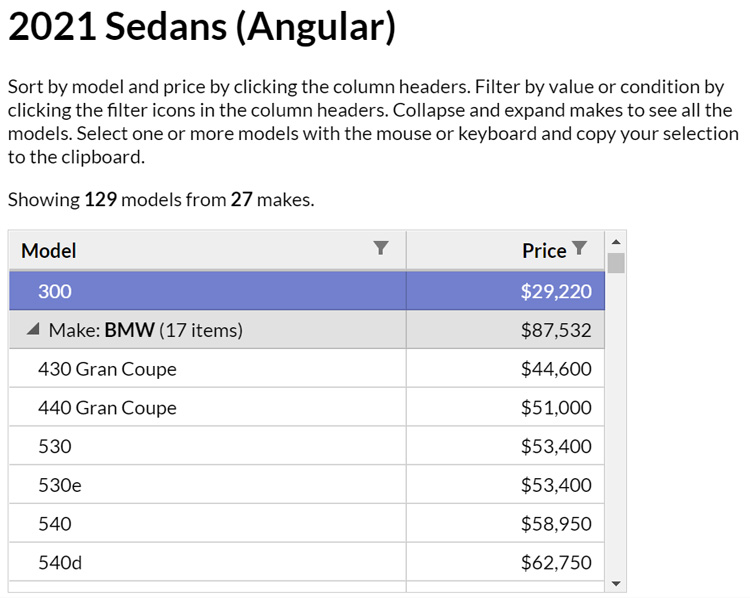 Happy coding! If you have questions or comments, be sure to enter them below.