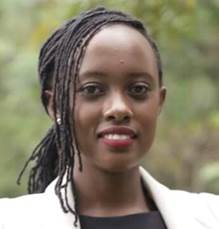 In an extensive React application, excessive or unnecessary re-renders are common. This article addresses instances of excessive re-rendering in React applications and provides several ways to avoid them. It is written for readers with a basic understanding of React fundamentals and React Hooks.

Try These Re-Rendering Reducing Techniques During A Free Wijmo Trial

Adhering to the single responsibility principle solves many issues. However, it does not solve all issues. State management is another cause for concern in React applications. State management libraries such as Redux and MobX are introduced to React applications because managing state within individual components becomes cumbersome as applications grow in size and complexity. It's important to note that the potential for excessive re-rendering is especially present when using a state container.

With any React application, an app managed by a state container is rendered to update the UI when the user interacts with the app. Rendering is essentially the way by which React knows whether it needs to make changes to the DOM. The initial render occurs in two main phases: the render phase and the commit phase. 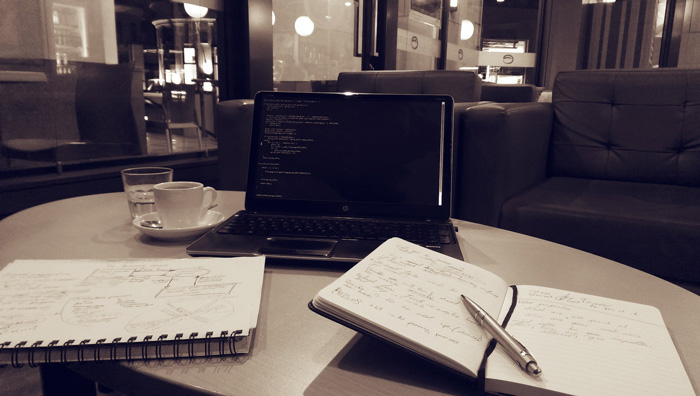 React will begin from the root of the component tree in the render phase and continue the process downwards to the child components. As it goes through each of the components, React invokes the createElement method, converts the component's JSX into React elements, then stores that render. Once this conversion is complete, the React elements are handed over to the commit phase, where they are applied to the DOM using the ReactDOM package.

A second or subsequent render to update the state is commonly referred to as a re-render. A re-render can be caused under any of the following three circumstances:

Unnecessary re-renders slow down app performance, draining users’ batteries. Fortunately, these inefficiencies can be prevented with the right techniques. Read on to learn more about re-rendering and how to avoid excessive re-rendering.

When Do Re-Renders Happen?

Re-renders occur when a component's state or prop changes. When neither changes, no re-render occurs. Just like the initial render, a re-render follows the render and commit phase process. However, in the case of a re-render, React finds the components flagged for an update.

For all flagged components, the components’ JSX will be converted into React elements using the createElement method, and the result will be stored. React then undergoes reconciliation which principally involves diffing the old and new tree of the React elements over the virtual DOM. As stated in the React documentation:

Once the reconciliation process is complete, the result is handed over to the commit phase, then applied to the DOM. To further understand what happens under the hood with JSX when a render happens, check out this detailed blog post.

It is possible to accidentally create new props objects and force components to re-render unnecessarily. As we continue to delve deeper into how this is possible, let's first go through this illustration of what could cause a wasted render:

Say a user clicks a button that triggers an update in C4 above. The update then comes down from the root, traverses through P3 to get to C4 to make the necessary change. Under normal React circumstances, when the root renders, all its child components would automatically render. In this case, P1 and P2 would also automatically re-render alongside P3, same as their children, resulting in wasted renders as they do not affect any changes. You can now see an example of what slows your app and leads to battery drainage.

A good example of passing of props can be well illustrated with class components as follows:

In this example, two components are getting rendered: MovieDetails and MovieRating. However, any new MovieRating will result in a consequent re-render of the MovieDetails which does not necessarily need to change. To resolve this, rewrite the code as follows:

Rewriting the same class component as above shows us that when MovieBuzz receives new props, the render function will not create a new constant for the movie. This action prevents the creation of a new props object that would force components to re-render unnecessarily. This scenario is simple, but you can imagine how much this technique would streamline a significantly bigger application with more components. Remember, rendering is different from updating the DOM. A component may be rendered without affecting any changes to the DOM.

Components that can be used multiple times in an application need to be sufficiently generic. Unlike class-based components, functional components with hooks undergo a lifecycle without explicit lifecycle methods. This process allows for obtaining code reusability in custom hooks. However great this is, it is essential to note that purely functional components with hooks always re-render during a React render cycle. Therefore, React Hooks provide the best example for component reusability.

When a parent component renders, React recursively renders all of its child components. Let’s have a look at an example using the useState hook.

In an attempt to get away from the usual ‘counter’ and ‘timer’ naming conventions, this example of a buzzer has Loud and Soft components. The Loud component is the parent of Soft. 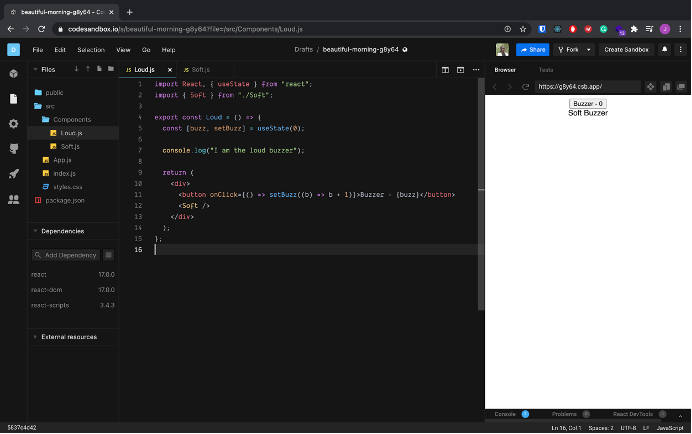 On the first load, the page displays "Soft Buzzer" under the Buzzer button, as intended. Clicking the button sends a state update message causing the Loud component to re-render. By convention, the Soft component will also re-render. Since nothing has changed in the Soft component, there will not be any output. Therefore, this is an unnecessary render of the Soft (child) component. 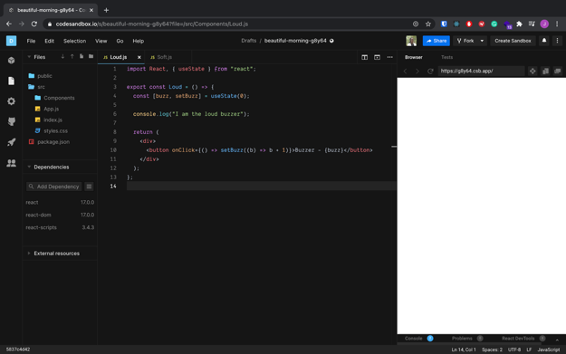 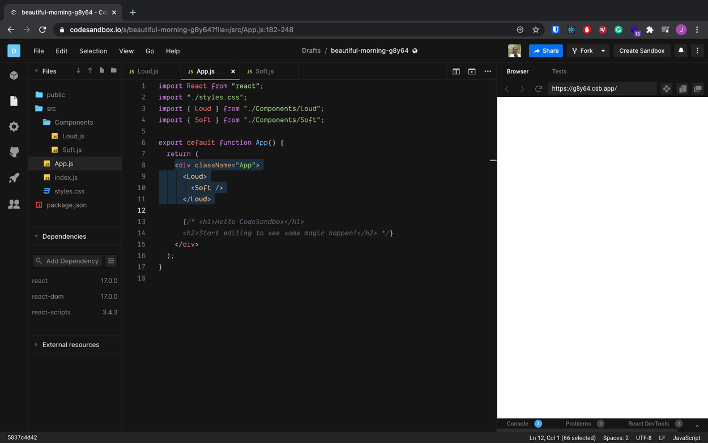 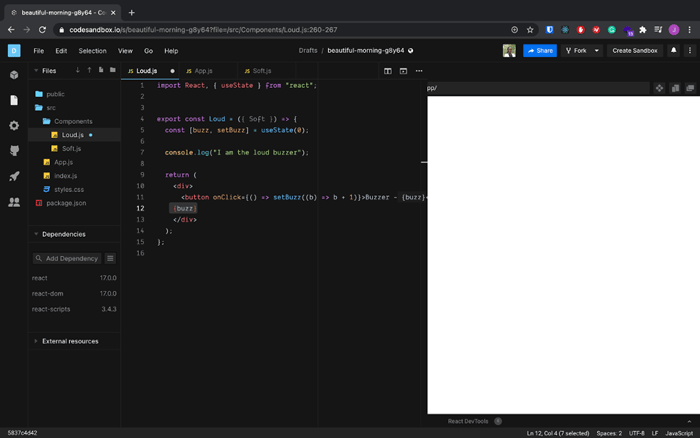 Unnecessary renders occur when child components go through the render phase but not the commit phase. One way to fix this, as shown above, is pulling static or infrequently used components up into a parent (or even top-level) component.

Each custom hook affects the execution flow differently, as is explained in detail in the article, React Hooks - Understanding Component Re-renders.

A traditional way of preventing excessive re-renders in class-based components is overriding a component update using the shouldComponentUpdate lifecycle method. This method takes in two parameters: nextProps and nextState. By default, when we call this method, the component re-renders once it receives new props, even though the props have not changed. To prevent the render method from being called, set the return to false, which cancels the render. This method gets called before the component gets rendered.

Sometimes you may want to prevent re-render even if a component's state or prop has changed. For example, when a component only cares about a piece of data nested inside the prop or state and the specific data has not changed.

Hooks have taken the React world by storm. This may sound cliché, but it’s a fact. One of the significant changes that hooks introduced to React is the potential to eliminate classes. React then introduced React.memo to facilitate better rendering in functional components, such as those with custom hooks. This introduction provided a new way to avoid excessive re-rendering.

Therefore, if your component props fail to change between renders, React will skip and reuse the last rendered result. It’s important to note that these new methods conflict with old ones. When using React.memo, shouldComponentUpdate no longer works on hooks-based components.

Affect React.memo in two different ways to improve app performance: use a single component as its only parameter or use a comparison function added as a second parameter.

Implementing React.memo Using a Single Component as its Only Parameter

Using the same naming convention as above, the basic use case is represented like this:

Implementing React.memoUsing a Comparison Function Added as a Second Parameter

This involves handling callback functions props. In such cases, use extra caution when memoizing components that use props as callbacks as they may give different results on each render. For instance:

The above example will re-render each time the LoudComponent renders since the props will have changed. To fix this, use the useCallback function to return a memoized version of the callback that only changes if one of the dependencies has changed.

We now understand how re-renders happen, what causes them, and how we can reduce unnecessary re-renders. To prevent excessive re-rendering, move the expensive component to a parent component, where it will render less often, and then pass it down as a prop. If this is not enough, inject React.memo into the code for better performance.

To delve deeper into this topic, check out, One Simple Trick to Optimize React Re-Renders.