by Greg Lutz in General, Mobile

If you were down in Orlando last week at Evolve 2016 then you probably stopped by our booth and met myself, Kelley, Lucas or Alvaro. We were extremely busy for three days showing off the new Xuni controls and demos while talking about Xamarin development with the 1600+ attendees. If you weren't able to attend you can still watch the Xamarin Evolve 2016 keynote.

At Microsoft Build 2016 it was announced that Xamarin would be included with all versions of Visual Studio (including the Community Edition), making cross-platform mobile development easier for C# developers. I had attended Build as well, so a lot of the new features in Xamarin were already spoiled for me. As a Windows guy, my favorite new feature is the Remote iOS Simulator on Windows. Assuming we'll never be able to compile iOS apps on Windows (i'll keep dreaming) this is really the next best thing. The new Workbooks and Live XAML Preview will be very useful for our upcoming webinars and training videos. But perhaps the biggest headline from Evolve was that the Xamarin SDKs are now open source!

Reporting from the Xuni Booth

We spoke to a lot of developers using or evaluating Xamarin for their enterprise or internal apps. We were pleased with the number of developers specifically looking for charts, grids and calendars - the three main controls we provide in Xuni. In addition to providing details on Xuni we were also driving people to our free white paper - How to build custom controls in Xamarin.Forms. If you're interested in learning the wide-angled approach to creating custom controls it's a gread read. If you're new to Xamarin and evaluating Xuni, this blog is the perfect place to get started. Kelley and I have been posting dozens of blog posts with samples and tutorials on getting started. Check out a few photos taken at our booth. 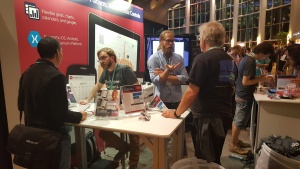 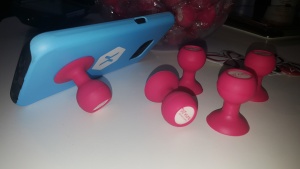 We look forward to meeting you at the next mobile dev conference!