Happy Birthday INETA 2014. I got a story for you that’s really lean. Those are the first two lines of a Rap that ComponentOne has compiled, honoring a great organization, INETA. It's a great story and here is the video for your entertainment and may it go viral! Developers will relate to it! Our Marketing team had a email thread a mile long coming up with the lyrics, along with many laughs. My team is comprised of Don Williamson, Shay Williamson, Eve Turzillo, Roger Hobbs and Tommy Hodges. They are the best! When I left Microsoft New England a few years back and moved to Florida, they threw me a great send off including a roast and a song by Bob Familiar, DPE East Lead. It was called, “The Legend of Rusty Crank”. Rusty Crank was the nick name by my boss, Rick Greene. He gave it to me, during the first 6 years of my career at Microsoft for cranking out a lot of work. So, this song is a continuation and wraps up some of the work and accomplishments while at ComponentOne over the past 3 years. Building developer community is such a fun thing sometimes, huh? Hat's off to Roger Hobbs, one of out C1 video editors. He could get a job with MTV after this effort! LOL!!!!! “The Legend of Rusty Crank continues…” CLICK HERE TO WATCH VIDEO 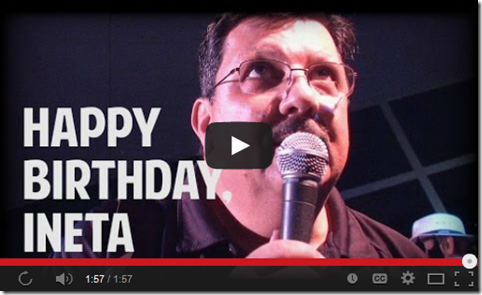