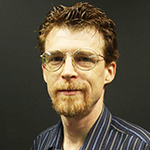 by Sean Lawyer in .NET, Desktop

Welcome to the new Spread.NET WinForms 11! If you've been waiting for a reason to upgrade or ready to try out Spread again, now is the time.

The new spreadsheet core models – implemented inside the new GrapeCity.CalcEngine.dll, GrapeCity.Spreadsheet.dll, and GrapeCty.SpreadSheet.Win.dll – are optimized for high-performance data access scenarios, especially for the most common spreadsheet scenarios of accessing large sets of data primarily organized by column and grouped by data type.

These new internal data structures are integrated into the new Calculation, Layout, and Style engines. These changes allow you to maximize performance for use cases involving large spreadsheets with many formulas, sorting and filtering large ranges, and applying conditional formats – everything is faster! Many of these speed enhancements are really, really astounding. SUBTOTAL function calculations are orders of magnitude faster – for example, this code snippet calculating 100,000 Subtotal formulas is 340 times faster using version 11: 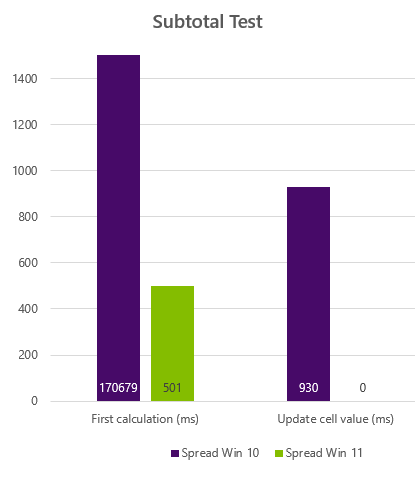 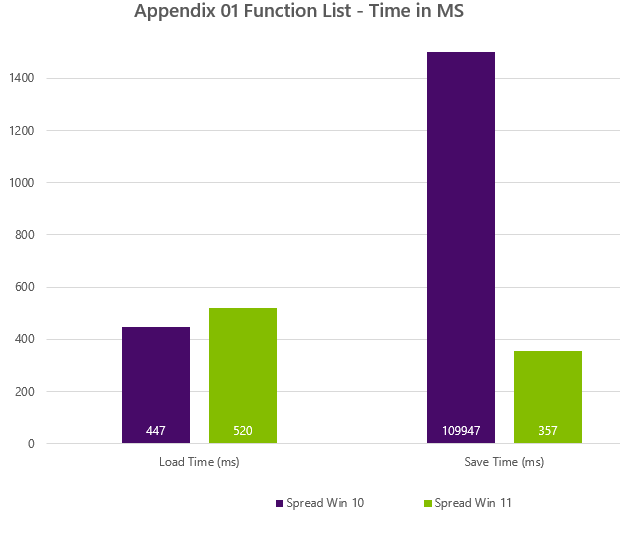 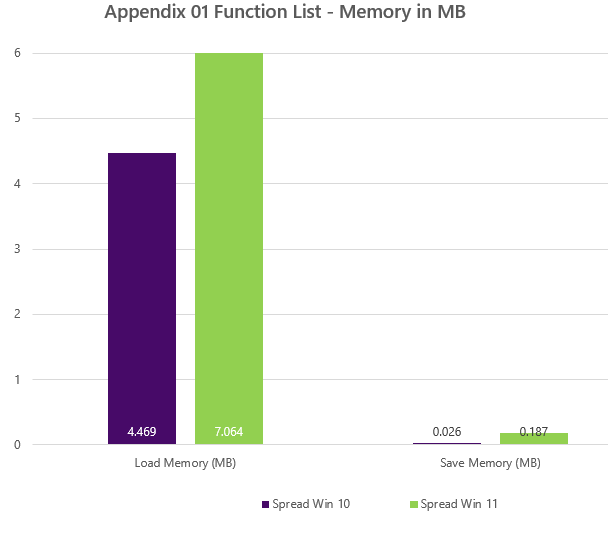 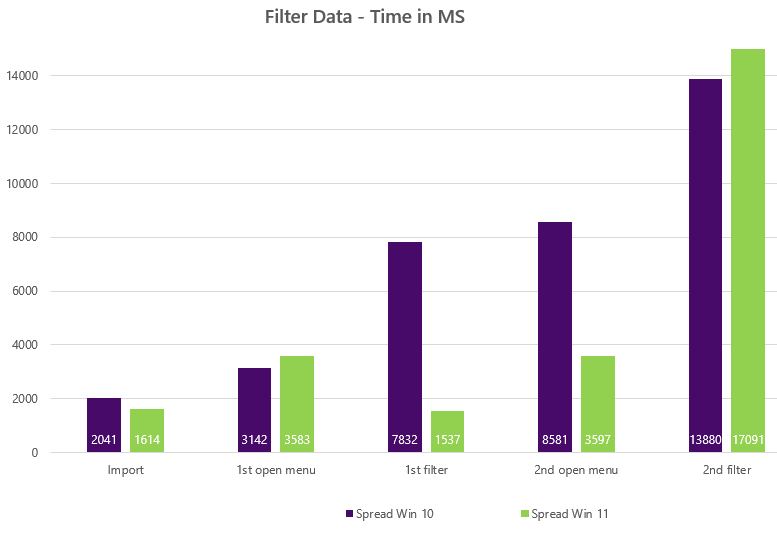 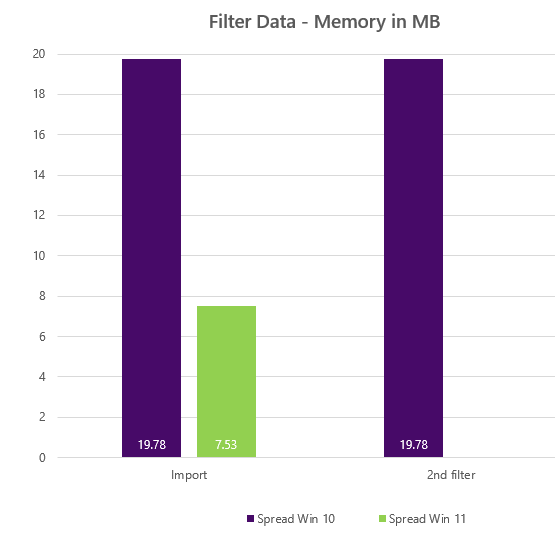 We've also enhanced the filter menu logic, so that opening the filter menu is slightly slower the first time (but not noticeably so) and much faster on subsequent openings – more than twice as fast in this case above.

Internal testing of a wide variety of template Excel spreadsheet files shows that really every spreadsheet is faster in Spread Win 11! 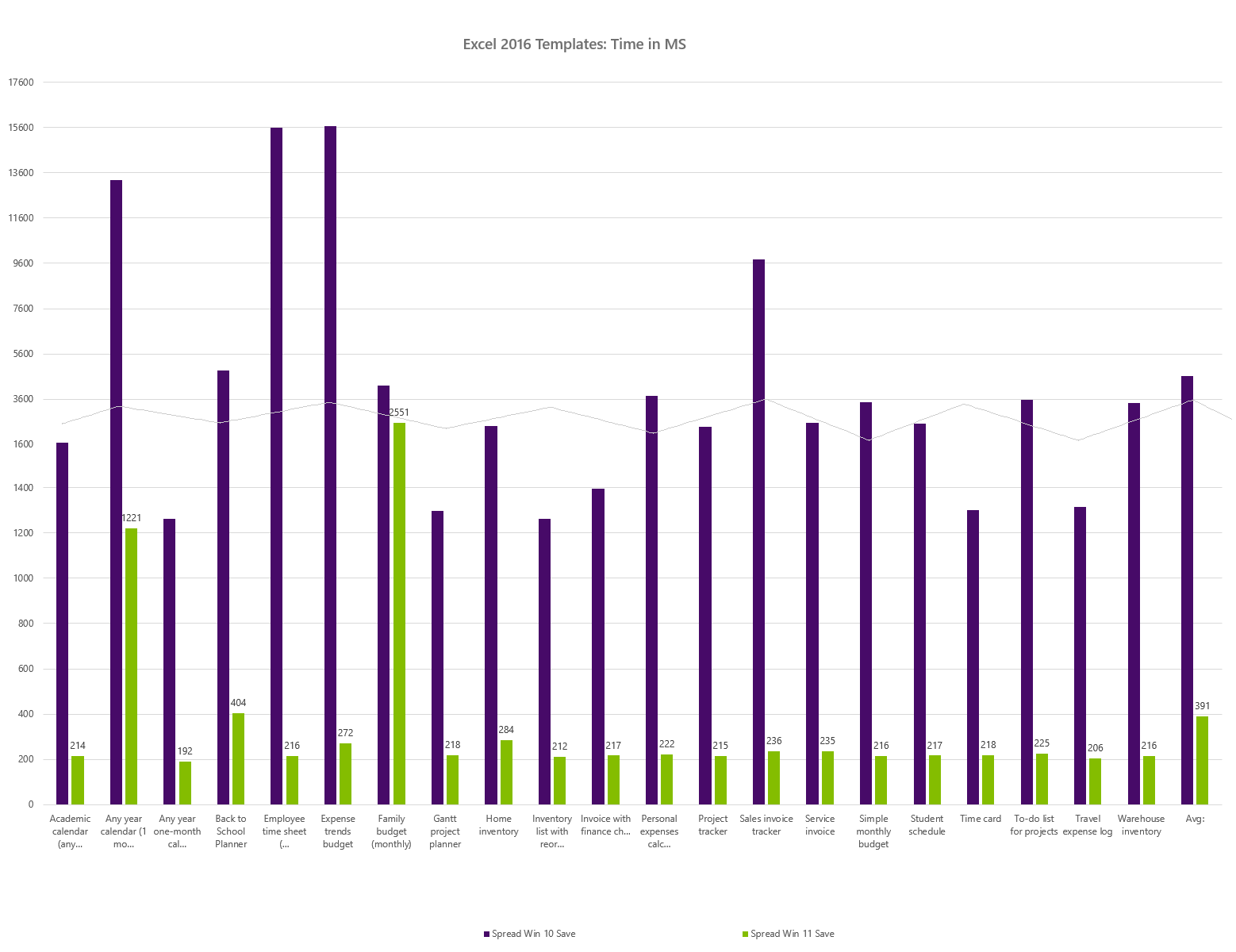 Note that on average, these files load nearly as fast (20 ms slower is negligible), but they now save more than ten times faster!

There is an unavoidable tradeoff between speed and memory, and faster implementations usually require more memory – the cases described above note the marginal increased memory use in version 11 to get those great increases in speed. We've also focused on optimizing use cases with lots of styles, since most spreadsheets contain many borders, cell formats, conditional formats, and other style information; these improvements trade off a little bit of speed for great improvements in memory footprint – this code tests setting many redundant styles and shows how memory increase is negligible now:

Here's a visual look at the memory improvement. 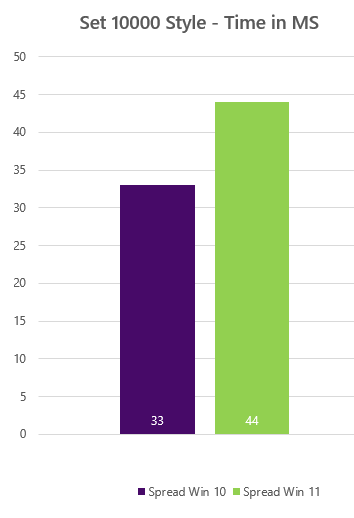 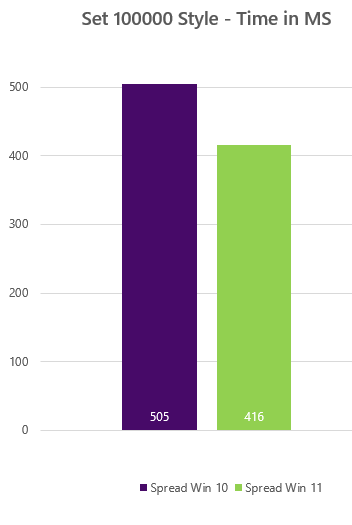 Spread.NET has the most extensive application programming interface and feature set of any spreadsheet component for .NET on the market today:

If you have projects using an older version of Spread for WinForms, and you're using Visual Studio 2010 (or later) and targeting .Net 4.0 or later, then you should upgrade.

Upgrading a project from any earlier version to the new release is very easy:

If you have any problems or issues upgrading, please let us know and we can help!

While we've made every effort to maintain backwards compatibility as much as possible, this degree of refactoring is simply not possible to accomplish without some breaking changes. We've kept these minimal and documented them here. There are also some obsolete classes which are no longer used internally, but they're still supported in the API for backwards compatibility; these are the old “sheet document model classes” that formed the core of the Spread.NET sheet document in earlier versions:

If you have code using these classes, or using the interfaces on which those classes are based, and are using that code to assign a custom model object to a property in SheetView.DocumentModels, then that code should be phased out and refactored to remove the dependency on the custom model and implement the logic another way. If you have such code and require assistance porting that code to version 11, please let us know and we can help!

** “FilterData.xlsx” created by some anonymous tester at GrapeCity in Sendai, Japan and available here.