From popular customer demand, we have improved our Excel-like advanced hyperlinks! SpreadJS will now support keeping hyperlinks in imported Excel files intact. Users can create hyperlinks with SpreadJS and export those successfully to Excel. We added extensive API to manage the different properties of those hyperlinks, including getters, setters, and hyperlink types.

Also, new functions were added to allow hyperlinks to be created automatically and a command for opening the URL of the hyperlink. Hyperlinks can be managed with the SpreadJS Designer dialog and the context menu at runtime. 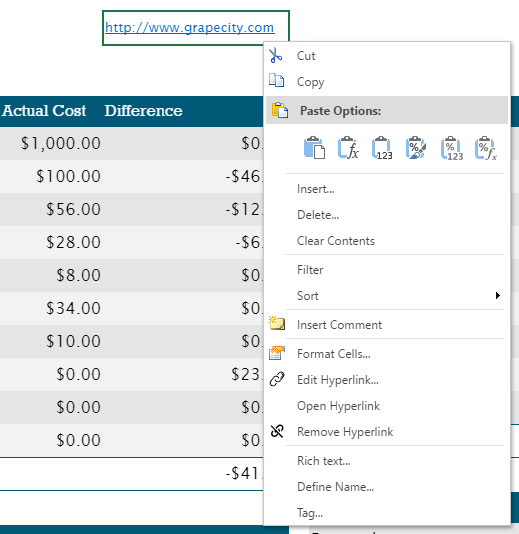 There are a few different places that hyperlinks can point to, which include:

Additionally, hyperlinks in SpreadJS can be connected to a particular behavior so that when the hyperlink is clicked, it can run custom commands that the developer defines.

Format strings provide a way for text to be formatted in cells automatically to developer specifications. With our new enhancements, developers will have more control over how they set formats, including formulas and values, at the same time! In previous versions, if a developer wanted to format a cell with a formula in it, the formatted cell would have to reference the cell with the formula result in it, rather than combining them. With the enhancement, formulas can be set as formatting and applied to different cells.

Custom functions can also be created with this, such as converting currencies to different countries/regions for international data.

With this enhancement, the current cell can be referenced with the "@" symbol.

Used in conjunction with the formatString API and formulas. One critical use case for this is in creating sparklines with user input:

We made an addition to our cell state implementation in the form of the dirty cell state. This allows you to use different styles to mark cells that have data that has been changed by the user, which can be useful when needing to track changes in a workbook or processing data after user input. In workbooks that use data from a database, getting only the cells that were changed instead of the whole database can be useful for performance enhancements.

In some cases, the standard sorting in SpreadJS is not enough for specific data. As a developer, custom sorting can be created with the API as a custom function and can sort on either the text or values in cells. As an example, custom sorting could be applied to numbers like "1.2.3.4.9", allowing the developer to sort by just the last number. This can work with different languages as well, such as sorting Chinese Pinyin or Strokes.

To create a custom sorting function, a developer will have to write a function that compares values or text using the API that we provide.

SpreadJS already supports percentage formats, but we have enhanced the editing to make it more Excel-like. When a percentage cell entered in Excel, a "%" symbol added to the end of the data.

We have enhanced our percentage formatting to match Excel.

Ellipsis and Tips for Cells

Text ellipsis has been added for cells when text can't fit within a cell. This works in many situations, such as indent, vertical text, auto fit, vertically aligned cells, cell padding, underlined cells, and outline columns. Text tips have shown when hovering the cursor over cells with ellipsis to display the full text of those cells.

When manipulating large amounts of data in a workbook, it can be useful to copy or cut cells and move them to other cells in a workbook. Typically, a user would have to insert rows/columns first and then copy or cut cells to paste in those cells. With v13.1, users can now do this in one action, with the context menu option Insert Copied Cells... and choose to shift cells to the right or down. 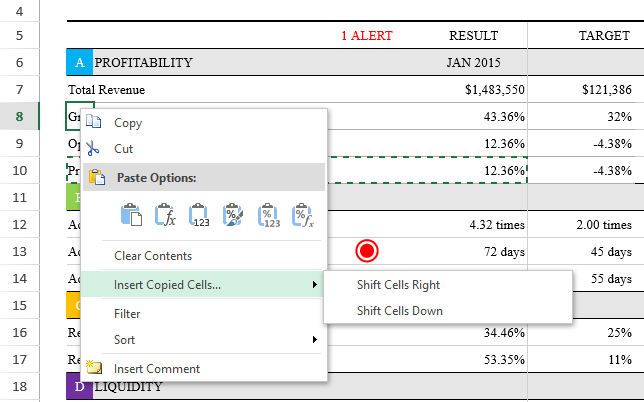 Combo boxes are mostly a drop-down menu cell type in SpreadJS, and with v13.1, we have added the ability for users to select multiple options from the list. For API, this is just a simple boolean property of the ComboBox class called isMultiSelect. Setting this to true will allow multi-select for instances of that cell type. It should be noted that this is a separate cell type from our cell button drop-down menus, which are a part of cell styles.

With v13, we added auto-expand for tables, so that when users tab at the end of the table, the table automatically expands with a new row. With 13.1, we have added the ability to disable this feature, though it is enabled by default.

We have also added the ability for developers to control the display of hidden rows and columns in their charts. We have provided a boolean property that can be set in code known as Chart.ignoreHidden().

If using the SpreadJS Designer, we added a UI option to ignore hidden rows/columns in a chart. With that option enabled, the chart data will only show the data that is visible in the source data range, without showing blank spaces.

Display Not A Number as Blank

In addition to hidden and empty cells, we have added an option to show "#N/A" cells as empty in charts. Primarily, the charts will treat these cells the same way that it treats empty cells.

Line types have been added for inline series charts, including API as well as Designer options to change the styles of a line:

We have added other enhancements with this release as well, including: