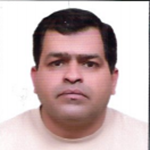 by Amit Pal in .NET, Desktop

With the 2017 v3 releases of ComponentOne Studio Enterprise and Wijmo, you can now take advantage of timeless charting with Point and Figure charts in FinancialChart.

Point and Figure is an age-old charting technique that was very popular before the invention of computers because of its objectivity and how simple it is to plot. With growing technology, other charting methods were made easier, and this classic paper-pencil method took a back seat. However, timeless charting has recently gained importance again, creating a renewed and growing interest for Point and Figure charts.

Point and Figure charting has a long and interesting story. Originally a price recording mechanism, it eventually became a charting method. In the 19th century, floor traders used to write the prices at which the stocks were traded in whole numbers.

Recording the movement of a stock using this method is very much like recording the scores and result of a tennis match: A tennis match last five sets, wherein a player can win individual sets, but the winner is determined by the final count of match sets each player has won. Similarly, although stock price movement is recorded, the Point and Figure method considers the culminating point of a day and not the price variations during the day.

Let's take a look at stock market data after a busy trading day involving a lot of volatility and price fluctuation. The following prices have been recorded row-wise, with stock prices opening at $50.

The above price sequence can be difficult to comprehend, even for the person who recorded it. Floor traders recognized a need for a column-based price recording mechanism to make these price sequences easier to comprehend. Figure charts — like the one shown below — were eventually created, which were easier to understand and more informative. 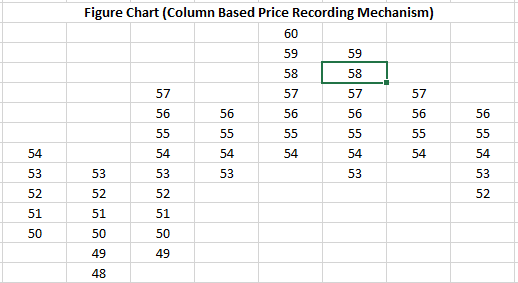 Later, Figure charts were simplified to record points instead of figures because the points were easier to interpret and comprehend (see the chart below). Thus, Point charts were created.

This charting method was then simplified even further, making use of the best practices of Point and Figure charts to draw patterns of X's and O's in separate columns to indicate the rising and falling of prices (as seen in the figure below). Traders began to refer to these charts collectively as ‘Point and Figure’ charts.

In 1898, an anonymous writer named Hoyle published a book titled The Game in Wall Street and How to Successfully Play It, formally introducing the Point and Figure chart to the world.

In the era before computers, Point and Figure charts were very popular because it was simple to maintain a large collection of charts at the time. Using just a pencil, a newspaper, and some graph paper, chart-makers were able to update and analyze 50 or more charts every day in less than an hour. Today, we can leverage the use of technology to easily analyze the Point and Figure charts in greater numbers and in less time.

Point and Figure, Renko, and Kagi charts are all time-independent charts, which plot day-to-day price movement without taking the passage of time into consideration. Because time isn't plotted on these charts, they can be used to filter out insignificant price movements.

This enables traders to remove short-term noise from their trading style, as minor fluctuations throughout the day usually cause a lot of fear and greed, eventually causing traders to lose a lot of money. We explain noise and how Renko charts eliminate noise in this blog post.

You might be wondering how Point and Figure charts differ from Renko and Kagi charts. While the main objective of these charts is the same — to eliminate short-term stock market noise — their usages are quite different in the financial market.

All three charts are primarily used to determine short-term and long-term trends. However, Point and Figure charts provide key support and resistance levels for entry/exit through bullish and bearish trend lines.

Advantages to using Point and Figure charts include:

Here's a screenshot of a Point and Figure chart drawn in ComponentOne FinancialChart: 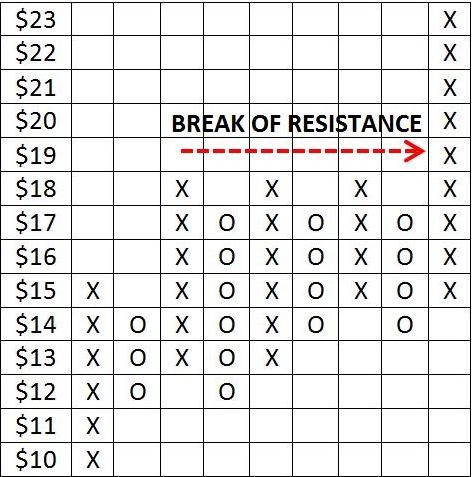 While conventional technical analysis charts — High-Low-Open-Close (HLOC) or High-Low (HiLo) — emphasize the stock’s price at different moments, Point and Figure charts only emphasize the stock’s closing price. The focus is more so on trend development than the daily noise created by minor up or down movements.

Points are added to the chart once the price changes by more than a predefined amount, which is known as the box size. For example, if the box size is set to one, and the price of the asset is $10, then another X will be added to the stack of X's once the price surpasses $11. Each column consists of one of two symbols (X or O) — never both. Following table values can be get missing text from Amit

The following table shows a sample price and a corresponding box size used to plot a Point and Figure chart, depending on the stock-traded price.

The key to Point and Figure charts is how the price moves from one column to the next. New columns are placed to the right of the previous column, and are only added once the price changes direction by more than a predefined reversal amount. The reversal distance is the box size multiplied by the reversal amount. Deciding the reversal box size is of paramount importance, and there is no defined rule for this. However, the three-box reversal is one of the widely used reversals for the Point and Figure method. Therefore, looking at the above table, to change columns from X’s to O’s when the stock was between 100 to 200 would require a minimum of 6 points for reversals, as the box size is two points.

Like Heikin-Ashi and Renko charts, Point and Figure charts provide a simple yet disciplined method of identifying current or emerging trends in market prices. They not only focus on reversal patterns, but also on a trend’s continuation for deeper analysis. Compared with other timeless charts, Point and Figure charts can give a larger picture of the market, and their patterns are easier to figure out for quick decision-making.

In the next blog, we’ll talk about how to trade with the patterns formed in Point and Figure charts.

Download a free 30-day trial of ComponentOne Studio Enterprise to try out our FinancialChart control.