2015v1 for Reporting focuses on modernizing the report ​designing, editing and viewing experience for the users. In addition, attempts have been made to revisit the Crytal Report Import tool of C1ReportDesigner, by improving conversion of a few CR features. The C1PrintPreviewControl now supports non-paginated SSRS reports adding additional features that were not supported in paginated mode. Here is a brief description of each feature -

Use a modern looking C1ReportDesigner with VS2013 Light based theme to accelerate the usability experience while report designing. The designing options and report fields have been re-arranged in the new version for better visibility. New detailed Office-style tooltips, on all menu items, will a​ssist users to look through the feature descriptions before using them on the designer. The Designer also makes it convenient to add border styles to visually enhance the appearance of controls on the report.

2015v1 adds the feature to write global scripts in the new VB Script editor that will allow user-defined VBScript functions/subs to be accessible anywhere in the report. The improved script editor allows users to switch between scripts and also change options like font, colors, etc., without leaving the editor. The editor provides advanced features like syntax check, pre-defined VB Script functions and re-arranged scripting functions to make the scripting experience intuitive and easy for the developers. For e.g., if a user writes a global function to set Backcolor on Detail section in Report.GlobalScripts then, without leaving the editor, the user can call this function from some other script, e.g. PageHeader.OnPrint script and call the global function setbackColor(). ​

CR Reports that calculate percentage increases or decreases with respect to other values, will now be converted successfully to C1Reports in the new version.​​ ​​This resolves the problem of obtaining static data on conversion.

By default, the CR time is displayed in long time format, i.e. hr:min:sec in 12 hr format. In the previous versions of C1Report, conversion from CR resulted in the format getting changed to short time (without seconds). Improvements have been made for CR import code in the latest version to make this conversion possible without the user having to rectify the time format.

In CR, different database paths are used to bind reports. CR import conversion code has been improved to handle this conversion so that the users will not have to worry about correcting data source paths after importing the reports.

Most CR reports combine data from multiple tables in the database into a single report. In the new version, Import code has been improved for successful conversion of such reports.

Some of the calculation and design operations that cannot be performed directly through properti​es are handled through functions written by users.​ This support has been improved by introducing changes in the script editor, with an objective to make some of the script conversions successful e.g. conversion of combined expressions like text and database fields in a single text field.

Till now users could only view SSRS reports in paginated mode in C1PrintPreviewControl. However, there were a number of reporting features that did not work in this mode. A new option to view non-paginated SSRS reports has been added in C1PrintPreviewControl enabling users to take advantage of advanced preview features like report navigation, text searching, bookmark view, interactively expanding collapsing report parts etc.​ 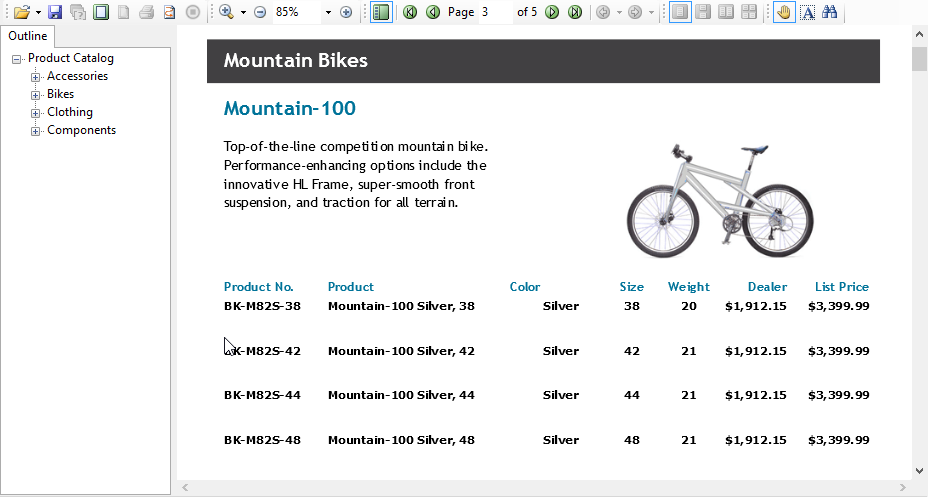 ​​C1dView report/document viewer app also undergoes a change in the look and feel using the VS2013 Light theme, to give users a new a​nd upto the mark report viewing experience.