The third subscription of Studio for ASP.NET Wijmo for this year has been released with some very cool controls and features for modern web applications. The emphasis of this release was on advanced data visualization with existing and new controls. Let's see what's new in the studio.

Visualize geographical data on a map. Get smooth zooming, panning, and mapping between screen and geographical coordinates with ComponentOne Maps™ for Studio ASP.NET Wijmo. Display online maps from multiple sources , you can even superimpose your own custom elements to the maps. ComponentOne Map is available as ASP.NET server control and also it can be used in an MVC application using the wijmap jQuery widget. 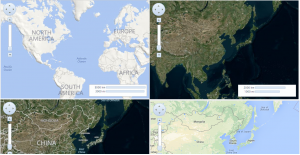 C1Maps can display online maps from various built-in and custom sources. By default, C1Maps provides three built-in sources for Microsoft Bing Maps™ including aerial, road and hybrid views. Additionally, C1Maps makes it easy to use the online map tiles of your choice.

The C1Maps control supports a vector layer that makes it easy to draw geometries, shapes, polygons and paths with geographical coordinates on top of a map. The vector layer is useful to draw: Political borders (such as countries or states) Geo details (for example, showing automobiles or airplane routes) * Choropleth maps (based on statistical data, such as showing population per country)

Deliver maps with custom data according to you needs with interactive tools supporting zooming and panning. With inbuilt support for open GeoJson format you can draw any shape on the maps.

Display Items on Map with Virtualization 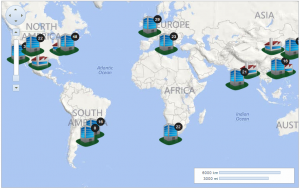 Display items on the Map control using the Itemslayer to effectively display geographical information and data. The virtual layer enhances the performance by only loading items which are currently in the view. 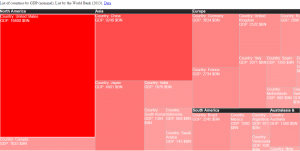 Create visually appealing hierarchical data maps with the ASP.NET Wijmo Treemap control. The ComponentOneTreeMap control is a type of chart that displays hierarchical data as a set of nested rectangles where the area of each rectangle is proportional to its value.With support for hierarchical data source and easy navigation you can create unbound or data-bound Treemaps in different layouts.

Set different layouts for the Treemap control, you can choose to show the data squarified, horizontally aligned or vertically. The Treemap control gives your application rich visualization with efficient use of space. 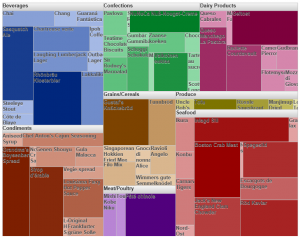 The ComponentOne Treemap control can be used in bound mode, you can use hierarchical datasource controls to create a bound Treemap, you can also load data to C1TreeMap control from external sources using the rich client side features of Treemap. 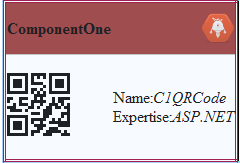 The C1QRCode control supports the 2D Quick Response barcode symbology. The QR format is one of the most popular 2D barcode formats today, with free readers available for virtually all smart phones. Use C1QRCode to display 2D barcodes in your web apps, reports, or use it to serve up barcodes from a web service.

The C1GridView now supports virtual scrolling for both row and column , show large datasets without worrying about performance.

This full-featured MVC sample manages patients, appointments and diagnoses for a fictional hospital. You will see many examples such as grids, carousels, schedulers, menus, input controls, and much more.

This complete reference application is a fictional web store for AdventureWorks. It uses our MVC tools with Wijmo JavaScript controls Web Forms controls, jQuery, CSS, and so much more.

This application shows the powerful data visualization controls you will find in our ASP.NET MVC templates. Use it to get an idea of what you can do with your own dashboards.

This full-featured WebForms sample manages patients, appointments and diagnoses for a fictional hospital. You will see many examples such as grids, carousels, schedulers, menus, input controls, and much more. You can play around with the new control samples in webforms and mvc. The fully loaded Studio for ASP.NET Wijmo can be downloaded from here.