Studio Enterprise 2013 v3 is now available just one day after the release of Visual Studio 2013. Normally each release I post about what's new in all of the ComponentOne XAML studios in one post but this time i'm splitting out WinRT XAML from Silverlight and WPF because there's too much to mention for each studio. Studio for WinRT XAML continues to expand greatly (see my next post about that), while WPF and Silverlight have some exciting new stuff that's exclusive to these platforms such as themes and 3D charts. Let's run through what you'll find new inside Studio for WPF and Silverlight this release. Download the 2013 v3 release of Studio for WPF and Studio for Silverlight to access these new features. Read below for more details on each major new feature.

The C1FlexGrid control now supports the creation of groups by dragging column headers into a grouping area, which is created by a separate component. What's neat and ultra flexible about FlexGrid's grouping panel is that you can customize the grouping behavior by using a simple value converter. So you can group dates into groups like "Older than one year" or "2 days ago," and or you can group values into ranges like High, Medium and Low. 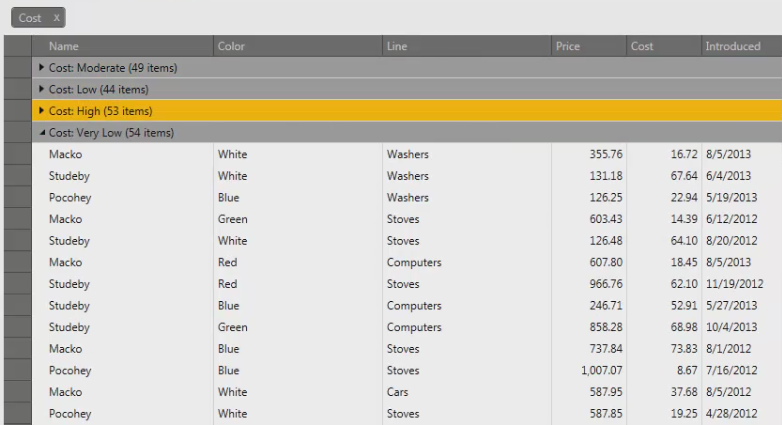 The grouping panel puts the power of grouping into the hands of your users. Once they have created a grouped display, they can further drag the markers to re-order or remove the groups on the fly. Download Silverlight sample. Download WPF sample.

We've worked extra hard to make the C1Chart3D control more usable for large amounts of data. That meant diving into the world of DirectX programming so that you don't have to! Now you can deliver the highest performance charting possible with DirectX rendering by just setting one property on the control. The new Direct3D render mode takes advantage of hardware acceleration features supported by your graphics card so it's much faster than dealing with WPF graphics. Learn more. 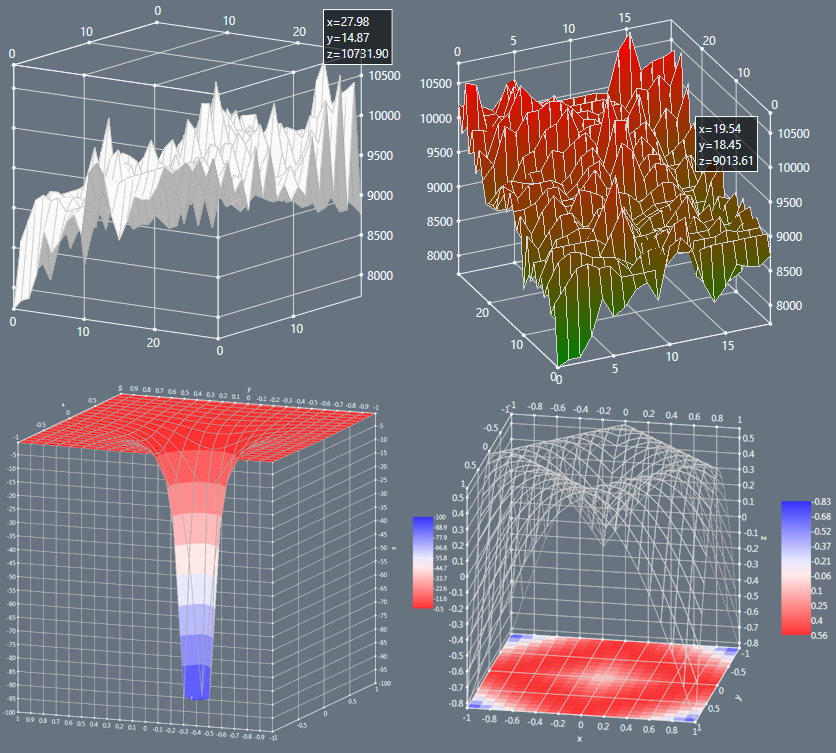 Also in this release, determine which value the user clicks and display UI elements on the chart with coordinate conversion methods: PointToData and DataToPoint. With these methods you can easily display labels and tooltips where the user positions their mouse.

One of the great benefits of Studio for WPF and Silverlight is how our themes not only apply to ComponentOne controls, but all standard controls too. So you can very easily style your entire application. In this release we add three new Office 2013 inspired themes. They are very similar to the Cosmopolitan themes; clean and modern. So now you have a total of five modern themes to choose from with Studio for WPF and Silverlight. Browse all themes. 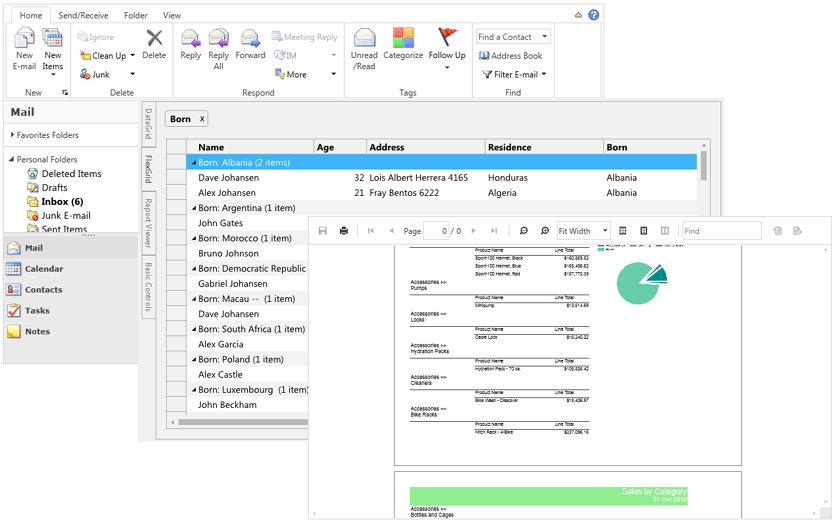 Users can now interact with PDFs in more ways. The C1PdfViewer control has been updated to support annotations and AcroForm objects (like text boxes, check boxes, etc). The control supports viewing and collapsing (not editing) annotations and sticky notes that exist in the document. 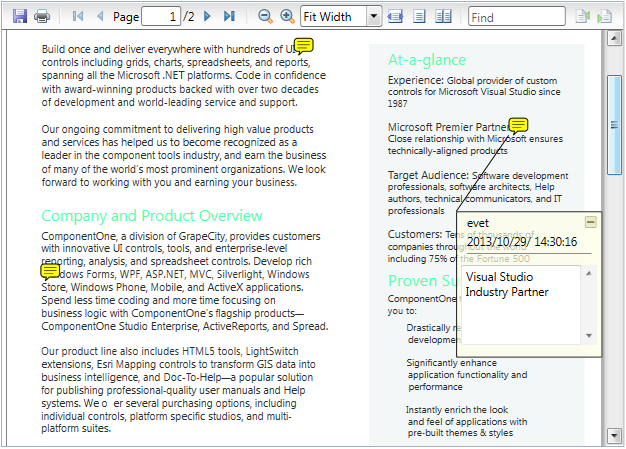 In addition to our Office 2013 themes you can make your apps more modern with our new progress bar control. The new C1ProgressBar control is modeled after the native progress indicators used on Windows 8 and Windows phone to provide a modern "loading" experience. To get the loading dots effect, you just set the IsIndeterminate property to true.

A Faster CollectionView for Silverlight

We have a new WPF demo application and it's called AdventureViewer. This demo uses Studio for WPF controls to visualize data from the AdventureWorks database. It demonstrates how to use DataTemplates along with the C1DataGrid, C1Chart, C1TileView and carousel controls with a modern UI theme. We've shipped the source code along with Studio for WPF this release. See all our WPF demos. 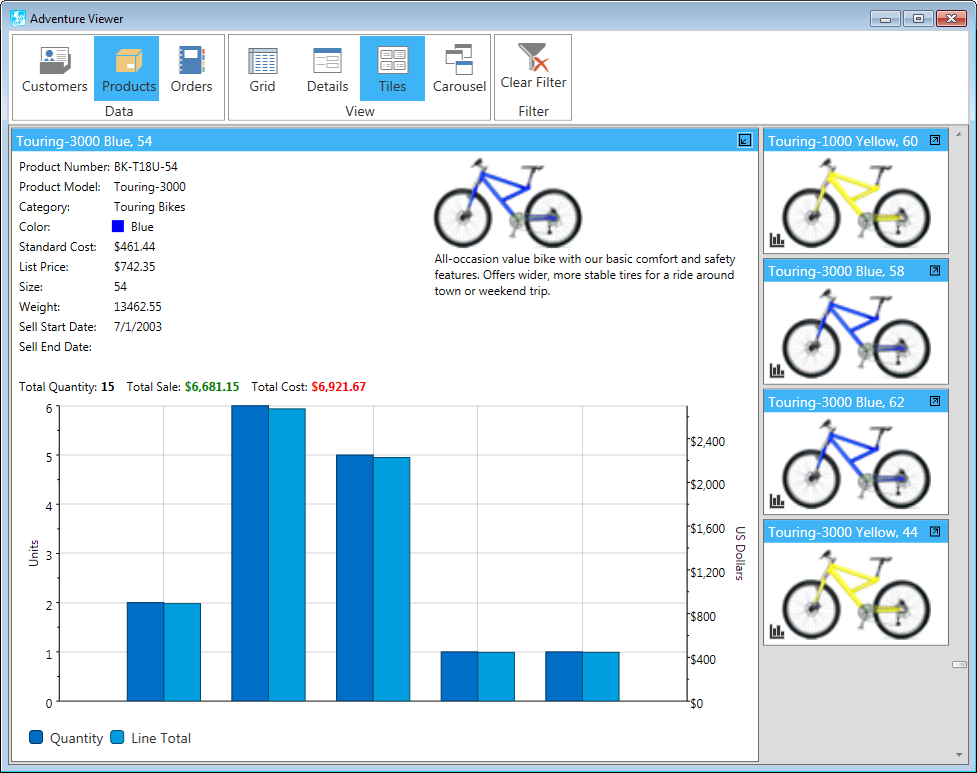 Download the 2013 v3 release of Studio for WPF and Studio for Silverlight to access these new features and samples. Stay tuned for what's new in Studio for WinRT XAML and other studios.