Wijmo’s second major release of 2018 has landed, and it includes a new Designer for VSCode, SASS support, accessibility improvements and more.

Until now, Wijmo controls were easy to use, but still required writing code. We're happy to announce that we now have design-time environments for creating and customizing Wijmo controls. We're providing two beta products for using a design surface similar to Visual Studio, including a live preview and property grid. The two designers are:

This designer is an extension for VSCode. When installed, it adds a “Wijmo Designer…” action above each Angular Wijmo component. When the action button is clicked, it opens up a design surface for customizing that specific component. You can change properties, bind events and save your changes back to the Angular application.

To install this extension in VSCode, click “install” from the Designer page on VS Marketplace.

You can also search “wijmo” in VSCode’s extension manager and install from there.

Make sure to reload VSCode after install. Then open up an Angular application that uses Wijmo controls and try launching the designer.

View the video tutorial | Read the blog | Get the VSCode extension

This designer is a web application for creating and customizing Wijmo controls. You can run this designer in any browser. It allows you to add controls to the design surface and then customize them to your liking. Once finished, you can copy the generated code into your own application.

SASS Support for Controls and Themes

Our control styles (layout, default styling) were previously written in CSS. Initially, it started simple, but it had grown to a point where it was hard to manage. We decided to rewrite our styles using SASS and a better organization. The end result will be similar for our customers, but you'll experience some nice benefits.

We hope these improvements help making styling Wijmo applications even easier. We tried to keep things as stable as possible by testing against older themes, and we're confident that your themes should work with these changes.

Read more about SASS in Wijmo

We're happy to reveal a real-world reference application for Wijmo that uses React and Redux. The application is a financial dashboard for tracking cryptocurrency values that's modelled after a production application one of our customers would develop. It uses modern design patters for React/Redux and a variety of Wijmo controls, and should help you evaluate and develop Wijmo apps. 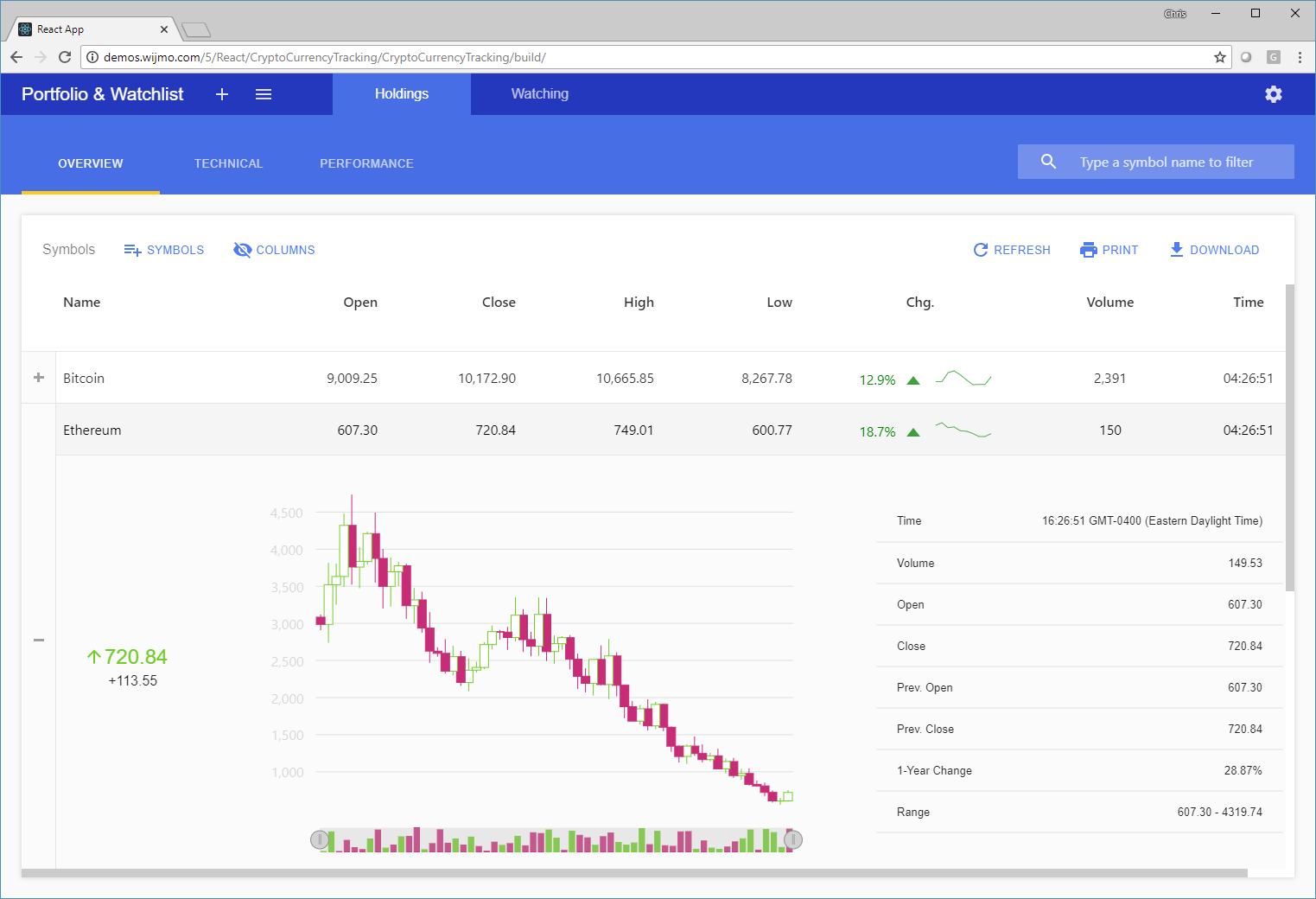 As Vue continues to gain popularity, we're improving our interop. This release adds some nice enhancements to our Vue 2 support. Most significantly, child components now correctly work in dynamic scenarios like along with the v-for and v-if directives.

We also added components like WjFlexGridDetail, added numerous child components, and added some new samples. Thanks for all the feedback on Vue, and please keep it coming!

We've also added ES6 versions of Wijmo modules (Beta version), which you can find in the NpmImages folder of Wijmo download zip:

We'll be continuing to research and develop our ES6 support this year. Feedback here is welcome!

If you're not familiar with web components, here's a good introduction to this technology.