by Chris Bannon in Web, Desktop

Wijmo's third release of 2019 has landed. Wijmo offers fast and flexible JavaScript components for every framework. This major release includes FlexGrid Cell Templates for React and Vue (similar to what we offer in Angular). You can also create Cell Templates in PureJS by using the new column.cellTemplate property. We have also added two-way bindings to our Vue components that simplifies the creation of input forms. We have several improvments to FlexGrid, from Column Pinning to Multi-Column Sorting, and much more. We have improved our TypeScript typings to make Wijmo even easier to use in VSCode.

This is a huge release that includes some great new features! Let's dive in...

We are happy to announce that Wijmo supports Angular 9! This release (Wijmo Build 5.20193.637) adds support for the Angular v9.0.0-rc.2 release. Wijmo is now compatible with the new Ivy Compiler. We have been working closely with the Angular team to make sure we can support the new Ivy Compiler so that our customers can use Angular v9 when it releases. The Angular team helped us with some recommendations in our module packaging and fixed some compiler issues as well.

So thanks to the Angular and Wijmo teams, you can start building even faster enterprise applications with the Ivy Compiler.

One of the most popular features in our Angular FlexGrid is Cell Templates. We now have this powerful feature available in React FlexGrid and Vue FlexGrid.

Cell Templates allow for limitless templates with declarative markup and binding expressions in any cell of the grid. 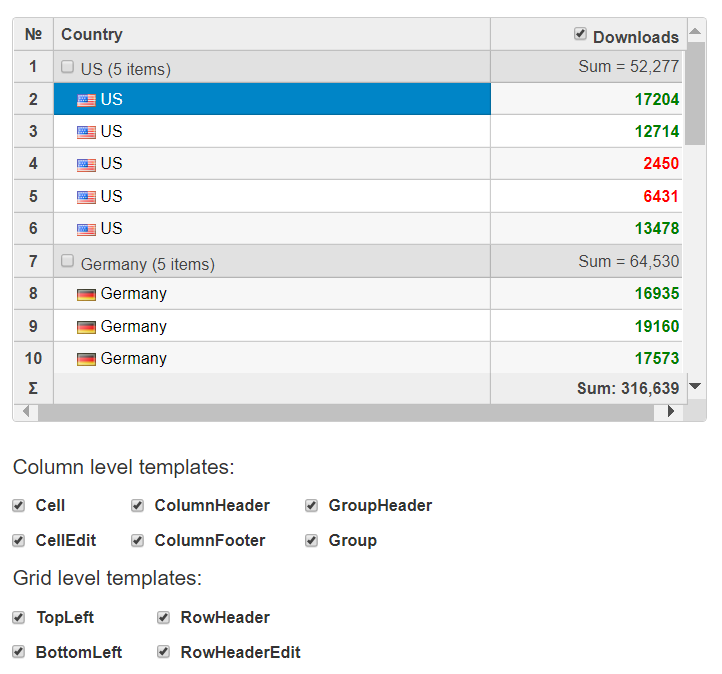 Cell Templates make customizing any cell in FlexGrid very easy. Here is an example of rendering a flag image in the country column.

As you can see, the fragment in the Cell Template can contain any markup, including HTML, bindings, and even other components.

Here is an example (similar to the React example above) of rendering a flag image in the country column.

Two-way bindings are a powerful mechanism that simplifies the creation of input forms. Vue offers two different syntaxes for declaring two-way bindings, the v-model directive, and the sync binding modifier. Wijmo for Vue input components support both of them, so you can choose between them depending on your needs.

You can find examples of Wijmo two-way bound controls in this live sample, where ComboBox and InputNumber are used in the cell edit templates.

Not to be confused with our Angular, React or Vue Cell Templates, we added a new API to our pure JS FlexGrid. Our Column class has a new cellTemplate property that allows custom rendering of data cells without using the formatItem event.

Column.cellTemplates are much more simple than our Angular, React or Vue Cell Templates. They only allow for a template literal string to be declared. You can put HTML elements in it or even binding expressions that will be parsed by our glbz method and rendered in the cells.

Here is an example of rendering a flag image in the country column.

The FlexGrid relies on the CollectionView class for sorting data. In previous versions, the grid's allowSorting property was a Boolean that determined whether users could sort columns by clicking on their header cells. This mechanism allowed users to sort on a single column at a time.

In 2019 v3, we changed the allowSorting property to an enumeration with the following values:

When sorting on multiple columns, the grid shows the sort order in the column headers, next to the sort direction glyph:

The FlexGrid always supported freezing rows and columns through code but did not expose a UI for controlling this feature.

In 2019 v3, we added an allowPinning property that adds pin glyphs to the column headers. Clicking the pin freezes or un-freezes the column:

As you can see in the image, FlexGridSearch control can be used together with the FlexGridFilter component.

The FlexGridSearch control was inspired by the discussion in the Add a Data Grid Search Panel blog.

In regular grids, each item is represented by a row with columns that represent the item properties.

In transposed grids, each item is represented by a column with rows that represent the item properties.

The FlexGrid has always supported saving the grid data to different formats. Saving to CSV is often a good option because you don't need any additional libraries, and the output file can be opened in Excel.

In 2019 v3, we made saving CSV files even easier and more powerful by adding two features:

With these changes, you can save CSV files using two lines of code:

These are the options available in the ClipStringOptions enumeration:

StepLine Charts are most commonly used to visualize change at specific points in time. They are useful for seeing the size of the change in value as well as patterns in change over time. We recently added new Step, StepSymbols and StepArea chart types to our FlexChart control.

We made some big improvements to our type information in Wijmo. These changes will make Wijmo easier to use and it will help you find bugs in your code much more easily.

Here you can see better type information in callback params (which previously was just the generic Any type).

Other changes we made in this release:

Read more about our improved typings