Wijmo 2020 v2 has landed. This release includes new Barcode and TransposedMultiRow components, new custom editors for FlexGrid, new PDF security features, and much more. We are also announcing support for Angular 10 as well as Vue 3!

Angular 10 has just released, and Wijmo already supports it! As always, we are committed to supporting the Angular project and its community.

As of 2020 v2, we are shipping ESModules. Previously, we had to disable ESM for compatibility with Angular 7 and 8 and an issue in the AOT (ViewEngine). Now, we have enabled ESM and Wijmo will work seamlessly with the compiler.

Read more about Wijmo and Angular 10.

Now that the Ivy compiler is tree-shaking and making smaller packages and Wijmo provides ESModules, your applications will be smaller than ever. The compiler will remove any unused modules and compile only the JS needed for production. When we tested, we saw about a 40% reduction in sizes of Wijmo application bundles after enabling ESM and upgrading to Angular 10.

Vue 3 is currently in beta. We are also releasing a beta version of Vue 3 support. Wijmo's Vue 2 package is compatible with Vue 3. We will continue to test against Vue 3 as it nears official release.

Read more about Wijmo and Vue 3.

Wijmo Stock Portfolio is a financial sample that demonstrates the usage of Wijmo Components in an OpenFin application. The previous version of this app loaded multiple OpenFin applications in separate windows, allowing the user to organize the desired workspace.

We have added new barcode components for creating 26 types of barcodes from QR Codes to UPC barcodes. Barcodes represent data in a visual, but a machine-readable way. They are used around the world to share and track information. Wijmo barcodes are rendered completely in JavaScript and require no server-side dependency.

Try our live demos in the framework of your choice:

FlexGrid has always had fast editing similar to Excel. But many customers want a richer editing experience based on data types. We offered ways of doing this before, but they required custom coding. Now, we introducing custom editors for FlexGrid columns.

Now you can specify custom editor controls using a single "editor" property on the Column class. The editor property simply needs to have an instance of a Wijmo input passed to it. You can use any Wijmo input that you want, including Date Picker, Numeric Textbox, AutoComplete, Color Picker, and more!

Take a look at the default editor (a simple textbox): 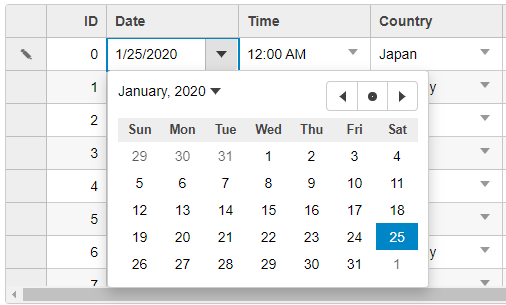 With custom editors for FlexGrid, you can really improve the user experience when editing data in a grid.

You can also define permissions for the PDF document including:

You can try our demos to test these settings yourself!

This component is a specific request from some of our customers in Japan. MultiRow is a popular UI convention in Japan and Transposing Views can be popular too. We have had a MultiRow component and also a TransposedGrid component. Now we have combined these two visualization techniques into TransposedMultiRow.

The MultiRow aspect allows you to defined multi-row layouts for a single record in a grid. Traditionally, there is a single visual row, but MultiRow breaks that paradigm. The transpose aspect is to repeat the records horizontally instead of vertically like in a traditional grid.

Here is an example of a MultiRow: 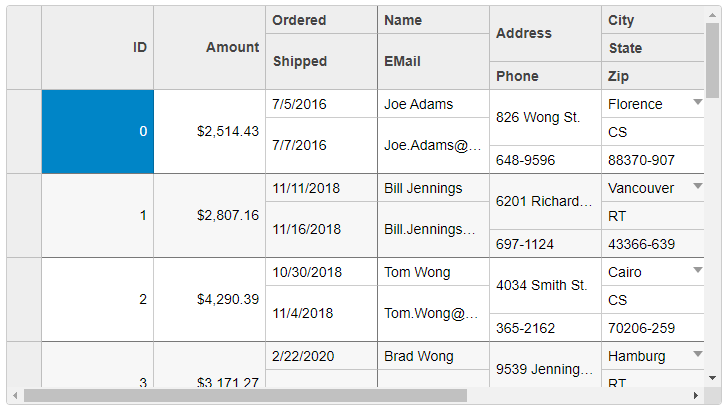 And our new TransposedMultiRow using the same data:

Note that the records scroll horizontally instead of vertically.

Feel free to try these for yourself in our live demos: