Well, 2015 went by quickly! It was a huge year for Wijmo, especially for Wijmo 5. Deciding to write an entirely new set of JS Controls that broke away from the traditional Widget concept turned out to be the right choice. Writing Wijmo 5 in TypeScript as a set of true Controls (classes) meant we have zero dependencies, and we don't require jQuery. These fundamental decisions have put our product at the leading edge of the industry—for example, Google's Angular 2 team chose to use TypeScript and Classes, and many developers are minimizing dependencies and opting out of jQuery. More important, though: 2015 was focused on YOU, our customers. Throughout 2015, we worked with many of you to help shape Wijmo 5. We've added features, controls, and some really nice extensions that are a direct result of your input. If you're one of the many developers with whom we've worked, you know who you are, and I want to thank you for taking the time to work with us during development and providing us with critical feedback. In 2016, we're going to continue looking to you to help guide our direction. So keep the feedback coming and expect this roadmap to change to accommodate customers throughout the year.

We're the most excited about our support for Angular 2 in the coming months. Wijmo was the first library to fully support Angular 1, and we're continuing that tradition. We've recently finished the first beta of our Angular 2 directives module, which will enable developers to easily integrate Wijmo controls in their Angular 2 applications. The fact that Angular 2 is based on TypeScript made our job easier; we've used TypeScript since the first release of Wijmo 5. The integration between Angular 2 and Wijmo is seamless, and our Angular 2 Explorer sample shows how easy it is to migrate your apps from Angular 1.x to 2.x. Take a look at our Angular 2 Explorer sample.

Look for our Angular 2 interop module beta release in the next few weeks, and let us know what you think! In the meantime, check out our ongoing blog series on Angular 2.

We've been working on a new wijmo.olap module that provides Excel-like pivot table and pivot chart functionality to Wijmo applications. This new module will make it easy for developers who are using C1Olap/XAML to migrate their apps from XAML to HTML. The wijmo.olap module contains three main controls: 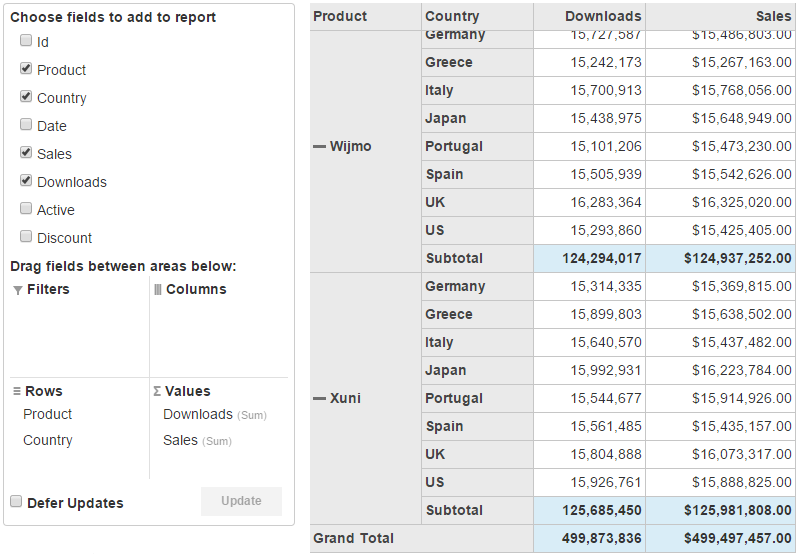 One of the most popular requests in Japan has been adding MultiRow support to FlexGrid, which shows one record of data that wraps into multiple "visual rows." It also supports merging cells. We plan to develop and release this FlexGrid extension sometime in 2016.

In addition to the major new items mentioned above, we are adding a huge number of smaller improvements, mostly in response to user requests. For example:

While we'll be focusing most of our efforts on shaping Wijmo 5 around our customers, we still reserve some time for fun. By fun, I mean pushing our controls to the limits of the browser. After all, Wijmo 5 was born from experimentation in ECMAScript 5.

We look forward to working with you in 2016!