The first Xuni release of 2016 is finally here! We've packed a lot into this release including a new calendar control that fills a major gap in the standard toolkits, as well as several major enhancements for FlexGrid and FlexChart. Each feature we've added delivers new functionality and helps improve the mobile experience in some way. And as always, everything new in this release is supported in all the Xuni platforms: iOS, Android, Xamarin.Forms, Xamarin.Android, and Xamarin.iOS. Download Xuni 2016 v1 >>> 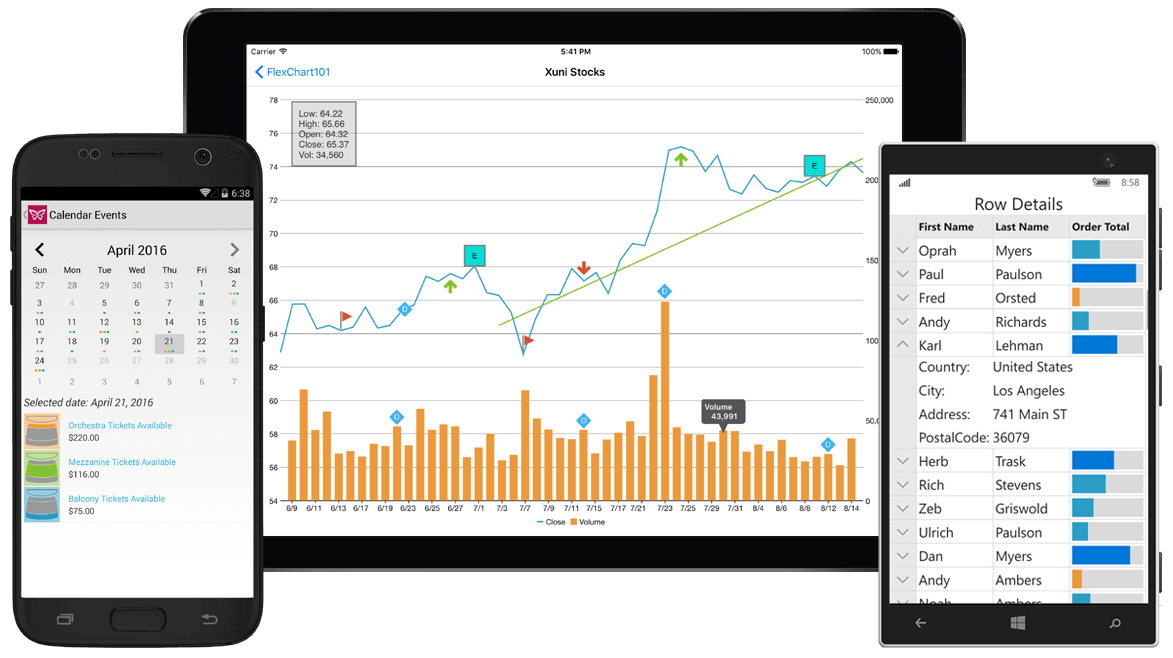 The new Xuni Calendar control provides date range selection and navigation, with smooth animation and built-in globalization. What makes Xuni Calendar unique is that you can match any popular calendar UI with either horizontal or vertical scrolling navigation. We designed calendar with both end-users and developers in mind. 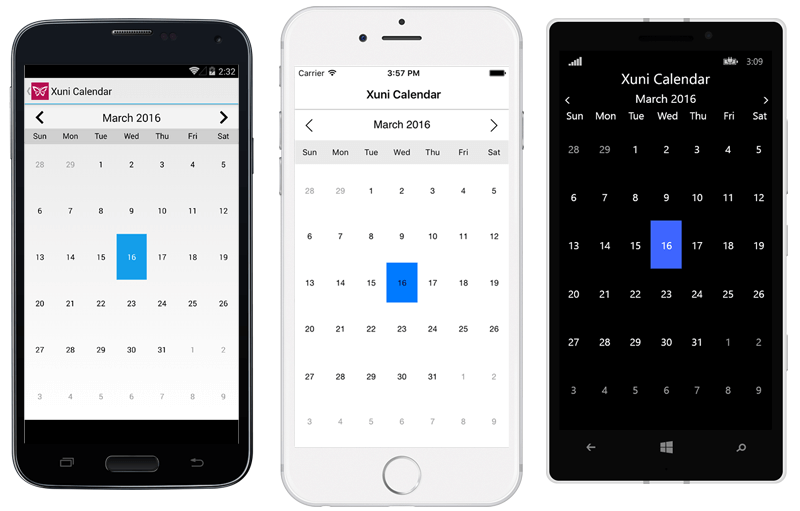 A calendar control designed for end-users... Enable users to select date ranges with intuitive tap gestures that allow selection of ranges that span multiple months. Navigation is performed simply by swiping left and right or by pressing the built-in buttons. Users can quickly jump to any month or year by tapping the header. The Xuni Calendar has built-in globalization which means month and day names are automatically translated to the device’s language and displayed in the appropriate format. A calendar control designed for developers... You can customize the appearance, including the header, to match any style. Use the calendar to visualize date-related information directly on the calendar by customizing the day slot templates. Take complete control over end-user selection by disabling dates such as weekends or holidays. Plus, you can limit the range of selection by setting a few simple properties.

Enable cell merging down columns and across rows to increase the readability of your data grid or to provide a merged table layout. Cell merging is enabled by just setting a couple properties. 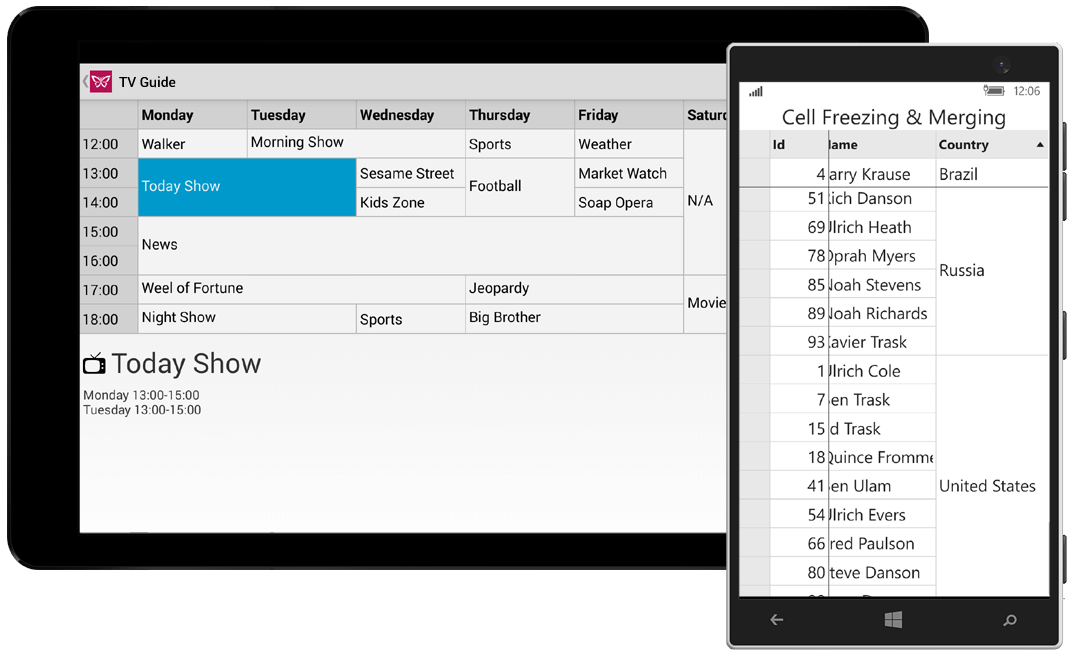 The new row detail feature allows you to display additional, bound data in a collapsible cell below each row of the FlexGrid. With UI space at a premium, it can be handy to display expandable details right within the grid and not rely on pop-ups or additional navigation in your app. The row details also allow you to show more data without necessarily requiring horizontal scrolling thanks to the proportional sized columns added in the last release. You can put anything in the row details like text or even another FlexGrid. Plus, you can customize the button icons. 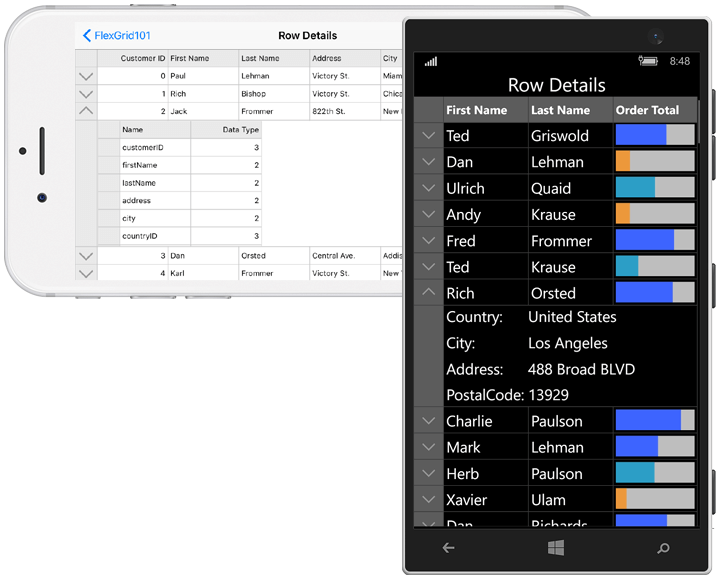 Create an entirely unbound FlexGrid by manually adding rows and columns, and then setting each cell’s value in code. Unbound grids allow you to achieve scenarios that may have previously been impossible to handle in a data-bound way. Here is some pseudo-code that shows how easy it is.

On iOS and Android, we’ve improved the interactive experience when users reach the top or bottom of the grid. On iOS the FlexGrid now has a rubber band effect that stretches and snaps back into place. On Android we've added the standard shadow effect so the user gets immediate feedback that all is OK - there simply is no more data. While now enabled by default, you can easily disable these enhancements by setting the TouchFeedback property.

In addition to improving overall performance for FlexChart in all platforms, we’ve added a few nice features such as annotations, legend wrapping and improved animation.

Attach a variety of different types of annotations to the chart, such as images, text, shapes and lines. Annotations are useful to callout specific data points, map out critical regions of the plot, or to mark important milestones in the data. They're a great extensibility point as you can now customize your chart in so many new ways with annotations. 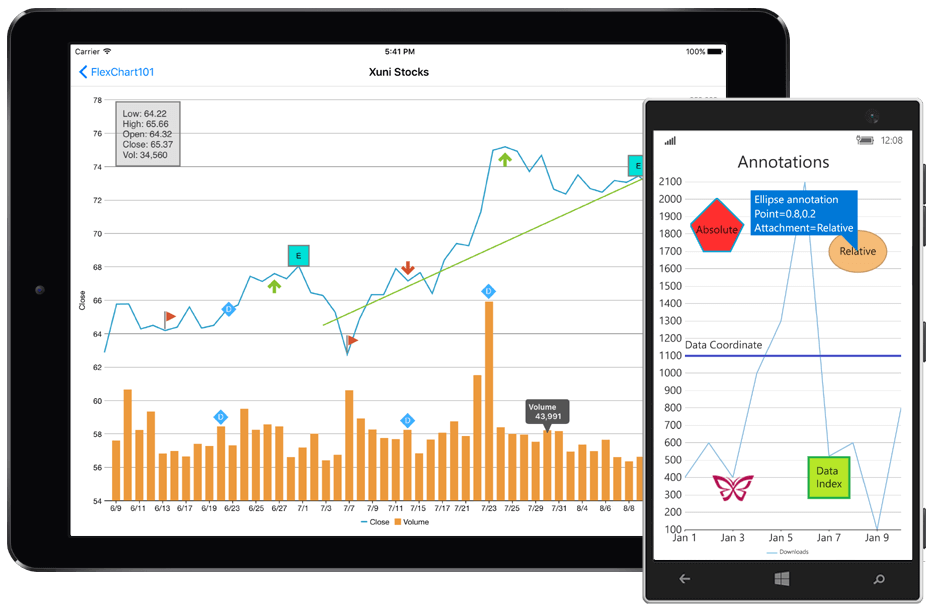 Legend Wrapping is a Must-have for Small Screens

We’ve also finally added legend wrapping so when a legend has too many items to fit horizontally on the page the items will nicely wrap allowing you to preserve space and not having to resort to a vertical alignment.

We’ve implemented a classic checkbox for iOS in this release as well. Using the standard checkbox controls in Android and Windows, we've even supplied the XuniCheckBox for Xamarin.Forms developers. Use it to visualize or collect Boolean input. It has animated features when the value is toggled, and you can customize the size and color. The XuniCheckBox control can be found in the Core library. 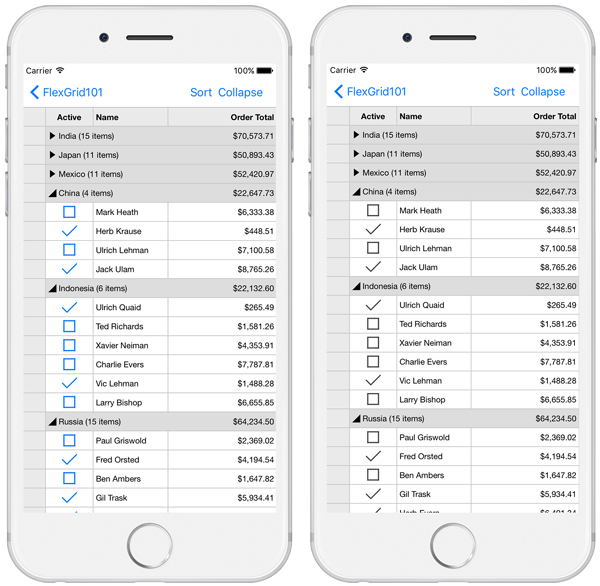 For the complete list of improvements, breaking changes and bug fixes, check out the release history section in the documentation. Download Xuni 2016 v1 >>>