Our Customer Asks, "How Similar Is It to Excel?" 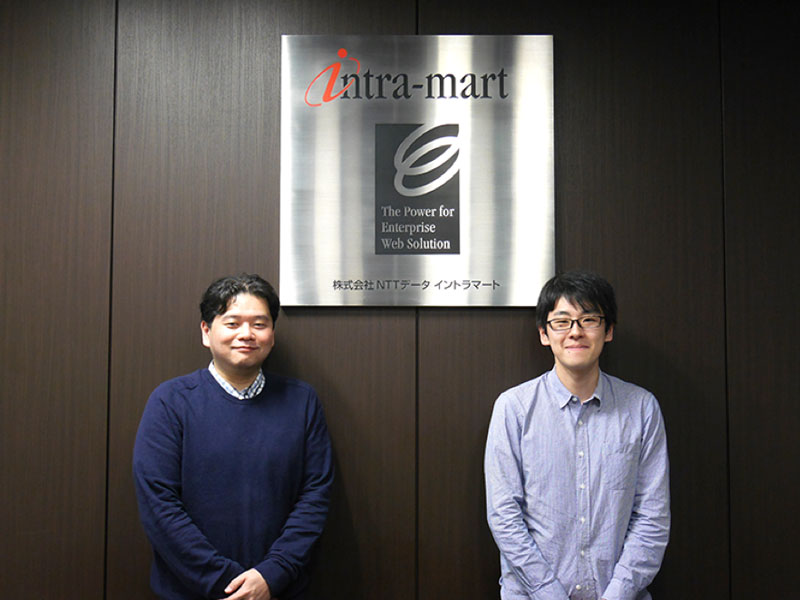 We interviewed Mr. Onishi and Mr. Miyawaki about "SpreadJS," which was adopted for the development of "IM-Spreadsheet," an option function of the aforementioned platform.

Question: Please describe what kind of system is the "intra-mart Accel Platform" (popularly known as iAP).

More than 6,000 companies have introduced this product. It's widely used as an internal core system as the means to visualize work processes and build transversal systems between departments. 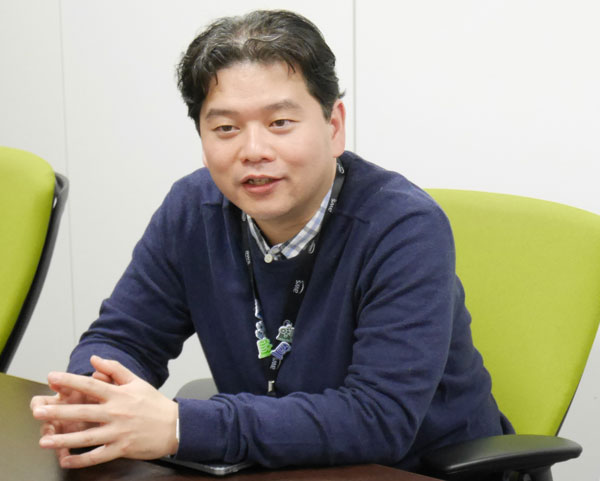 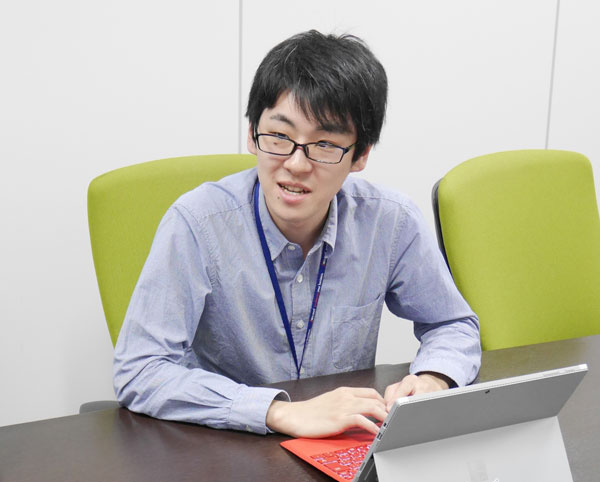 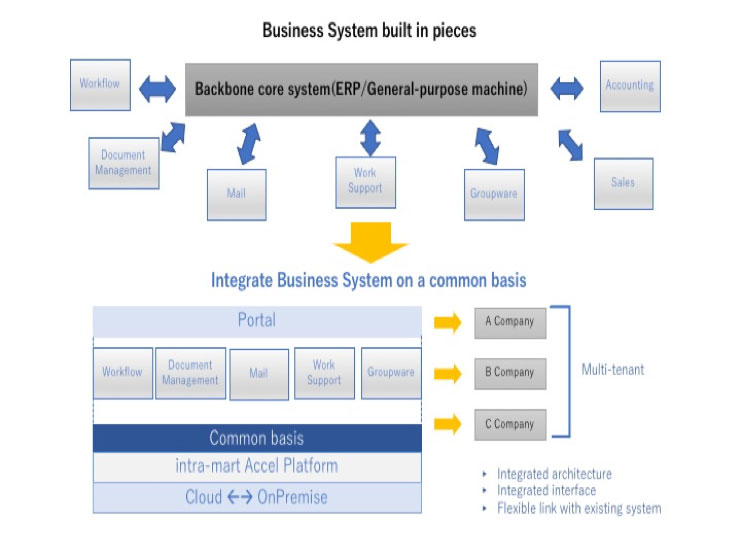 Question: Your product has been introduced to numerous companies. Is there any particular reason or trend visible to your customers that can explain why iAP is so popular?

Mr. Onishi:
Because the majority of our partners are Slers (System Integrators), many development projects are still outsourced. However, in recent years the term "in-sourced" has become more common, and I feel that what is done internally isn't program writing. Instead, it tends to shift toward the non-coding type of in-sourced development.

In that sense, it's becoming much easier for users to use the product, and we tend to focus more on the user side and the digital transformation (DX) when enhancing the product functions. We must think how we can improve the product usability, convenience and productivity for users. I suppose that the mechanism to deliver these improvements to users itself has shifted to the non-coding type of in-sourced development.

Do Japanese Companies Love Excel? Circumstances Behind the Adoption of SpreadJS

Question: Your company has recently adopted the JavaScript library "SpreadJS" for "IM-Spreadsheet, " which is an option function of iAP. I understand that this has made it possible to build a web system that incorporates spreadsheet in iAP. Please tell me the reason why your company decided to provide the Excel functions to your customers as an option.

Mr. Miyawaki:
Because many Japanese companies use Excel, we had received requests to create an input format and the operational feeling similar to those of Excel on the Web. Furthermore, as we mentioned earlier, because the majority of our partners are Slers, some of their clients expressed their desire to have components that are dedicated to Excel.

Mr. Onishi:
Before IM-Spreadsheet was developed, Excel and iAP were jointly used for any matters to be handled on Excel, or the entire Excel was displayed on the screen using ActiveX. We also partially incorporated an OSS (open source software) library, but the response was extremely slow.

Additionally, its operational feeling was different from that of Excel, and users often complained that it wasn't easy to use.

Question: You told me that your company was using OSS. Why did you adopt SpreadJS, which is a fee-based library?

Mr. Onishi:
To be honest, if any high-quality OSS was available, that would have been good enough for us. However, for this particular field, no OSS can satisfy the functional requirements. That's the primary reason for us to adopt SpreadJS. Additionally, because GrapeCity has years of experience in providing components, we decided to adopt SpreadJS, expecting that the company would also give us strong support.

Mr. Miyawaki:
We compared SpreadJS to OSS libraries and other fee-based libraries. I concluded that no other library resembled Excel to the extent that SpreadJS did. I wanted to keep the appearance and operational feeling of our product as close as possible to those of Excel.

Mr. Onishi:
Many customers who wanted to "use Excel on the Web" also wanted to display large amounts of data on the screen in a big table. Therefore, the screen response was also important. SpreadJS used Canvas, which draws tables at high speed, which is extremely helpful. In some cases, customers decided to adopt our product after they saw our demonstration of SpreadJS and its actual performance.

What's the Response Inside and Outside the Company?

Our Customers Are Accustomed to Excel

Question: Was there any response upon the release of IM-Spreadsheet in June 2018?

Mr. Miyawaki:
Our company holds an event called "Enterprise Web Solution" (popularly known as EWS) for our customers on a regular basis. At that event, which was held in October 2018, the most visited booth was that of IM-Spreadsheet. On the day of the event we gave a presentation to introduce IM-Spreadsheet. It was so popular that the session was fully booked during the advance registration. We had to add some seats in the booth at the event.

Mr. Onishi:
Although the themes of the EWS were RPA (robotics process automation), BPM (business process management) and AI (artificial intelligence), the fact that Excel can be used on the Web with ease through an in-sourced system (which can be readily achieved through the use of iAP and IM-Spreadsheet), was appealing to our visitors. The basic issue for our customers is that it's hard to work with other people on a single Excel file. Thus, the need is exceedingly great. The interface and operational feeling that customers--who actually use the program for daily work--are most accustomed to are those of Excel. For that reason, I felt that they were very interested in IM-Spreadsheet.

Mr. Miyawaki:
The product is highly regarded in our company as well. In fact, I've received positive comments from our sales staff, "Because IM-Spreadsheet is highly compatible with Excel, it's easier for us to present it to our customers," and "Everyone understands the concept."

Question: Could you give me some examples of actual application of IM-Spreadsheet? For what kind of systems is IM-Spreadsheet used?

Mr. Onishi:
IM-Spreadsheet is most commonly used in budgetary control systems. The majority of these systems are used to manage various work plans simultaneously. For example, in one of the actual cases, in this company's previous system someone collected Excel files from each department through e-mail and integrated them into a single file. They created a system in which these processes were integrated on the Web so that members of each department could directly input data into it.

As seen in this example, most customers who use IM-Spreadsheet integrate Excel data scattered across departments into one system. In such a system, various tasks such as budgetary control, sales management, business-result control, office equipment management, KPI management, and issue management are integrated in a single workflow. 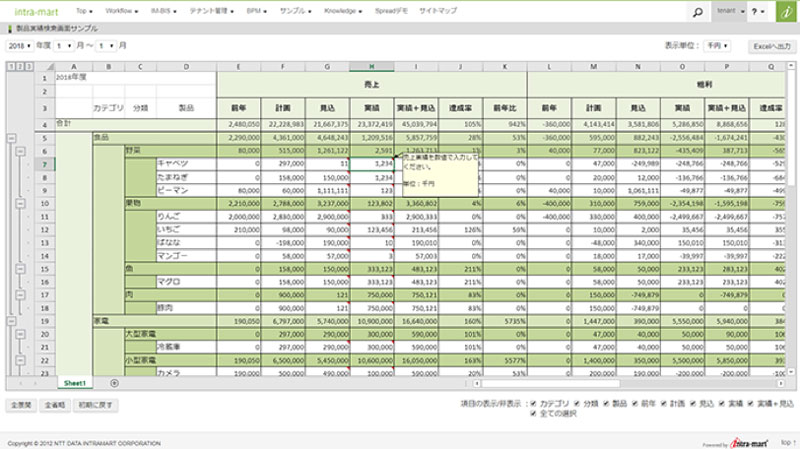 Question: Do you plan any version updates for iAP and IM-Spreadsheet?

Mr. Onishi:
iAP used to be intended for SI (system integration). However, we're planning to focus more on the "low code and no-code development" with the keyword "in-source." Given such circumstances, we want to upgrade IM-Spreadsheet as an "Excel-like" UI component by improving its usability so that our customers can create an Excel-like screen merely by placing a link to/display/edit other systems from this screen.

Question: I heard that it will become possible to use IM-Spreadsheet on "Accel-Mart," which is a Cloud version of iAP. Is this true?

Mr. Miyawaki:
Yes. We're currently examining the possibility of incorporating IM-Spreadsheet into Accel-Mart as a standard feature. Because IM-Spreadsheet is an extremely popular function in iAP, we expect it to become the most attractive feature of Accel-Mart.

This case study was originally published by and for our GrapeCity Japan office website. This article was translated and republished with the author’s permission.