Check out the newest features and updates from Wijmo's third major release of 2018.

Build 568 is identical to build 567; however, it includes a fix to a critical bug in FlexSheet. The issue was prominent in our Angular interop and in some other cases, when a Sheet itemsSource was being bound without the Sheet being owned by a FlexSheet instance.

Check out the Wijmo Build 568 Release

We’ve added a ribbon sample that shows how you can create ribbons easily using the TabPanel control and the controls in Wijmo's input module.

The ribbon element is a TabPanel. The tab pages contain groups of controls arranged in rows and columns. Controls in the groups use Material Icons, and have tooltips created automatically based on the aria-label attribute assigned to each control.

The Wijmo PivotGrid allows you to drill down into cells to see the data items that were used to calculate each summary.

Now, the grid exposes the detail dialog through its detailDialog property, which can be used to customize the dialog: 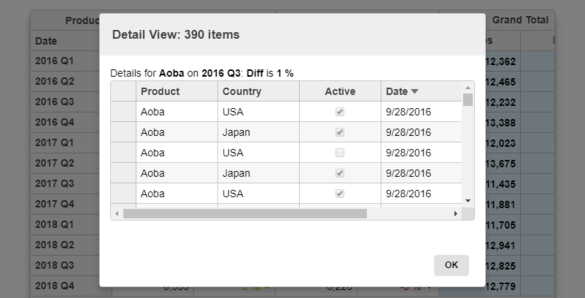 We also added a PivotField.getValue property to OLAP that allows you to specify a custom function to be used for retrieving the field value for a given item. You can use this to implement calculated fields such as 'binning' (e.g. Value => large/medium/small) or calculated expressions (e.g Conversion => downloads/sales).

You can now click on the year header to open a year picker that allows you to much more easily jump to different years. This little enhancement should save your end users some time when selecting dates.

Our Menu control now supports adding multiple submenus to it so that you can create more complex menus and context menus. We also added an option to open menus on hover. We're very excited about Angular 7, and as you know, Wijmo has first-class Angular support. We're happy to announce that Wijmo supports Angular 7, so you can use the current version of Wijmo to build Angular 7 applications today.