The MultiRow control allows users to see and edit data in a tabular form, just like other conventional grids.But, MultiRow is different from these grids in a way that it allows you to bind each data item to multiple rows,creating form-like interfaces that can display a large number of columns with minimal horizontal scrolling.

The LayoutDefinition property specifies the layout of the cells in the grid.It contains a list of cell group objects. Each cell group specifies how many columns the group should span, and the cells that make up each group. 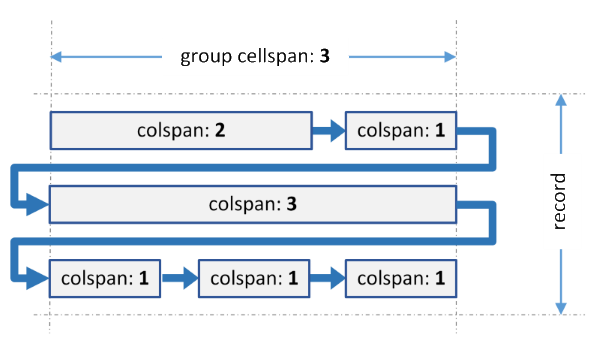 The group spans three grid columns. It contains six cells with different spans.When generating the layout, the grid fits as many cells as possible in each row, and wraps to the next row when the group span is reached.The last cell in each row is automatically expanded to fill Colspan of the group.The process is similar to wrapping of text to create a paragraph.