I couldn't be more excited to announce our involvement in Juice UI. Juice UI is appendTo's modern equivalent to the Ajax Control Toolkit. The Ajax Control Toolkit served a great purpose for its time, but its time is coming to an end! Juice UI offers developers a great option to migrate to jQuery UI with ease. The Controls will feel familiar to anyone who has used the Ajax Control Toolikit. And we can attest that moving from Microsoft Ajax to jQuery UI as a framework is a big win with tremendous benefits. Just like we realized with Wijmo, appendTo decided that jQuery UI was a great foundation to build on in JavaScript. They have fully adopted jQuery UI by making ASP.NET Controls and Extenders for the widgets shipped with jQuery UI. Juice UI is developed by our friends at appendTo. They have done a great job at making an ASP.NET version of jQuery UI. Now jQuery UI is more accessible to .NET developers that are not yet familiar with JavaScript. We followed a very similar pattern here at ComponentOne when creating Wijmo. We built it on jQuery UI as a pure client-side UI kit. Then we extended our Wijmo widgets as ASP.NET Controls and Extenders in Studio for ASP.NET Wijmo. We could not be happier with this decision to move from MS Ajax to jQuery UI and our customers will tell you the same. For that reason, we're so excited to see appendTo and Microsoft going in the same direction.

Get Started with Juice UI

Juice UI is very easy to get started with. You can install it using NuGet Package Manager Console like so:

Or if you prefer using the UI, you can access the JuiceUI package which is located here: http://nuget.org/packages/JuiceUI Now let's try using a Juice UI Control. Since the jQuery UI DatePicker is arguably the most widely used widget let's try it! First, we take a plain old ASP.NET TextBox like so:

Using the Juice UI DatePicker Extenter, we can turn this TextBox into a nice DatePicker. The key to using Extenders is to specify the TargetControlID which tells the Extender what Control to extend, like so: 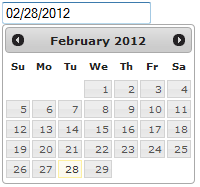 The end result is a nice calendar dropdown for our TextBox that allows end users to pick a date. The Juice UI Extenders could not be any easier to use. But don't take my word for it, go try them for yourself!

During the development of Juice UI we have been working closely with appendTo in order to help extend Juice UI. Since we have 18 Open Source jQuery UI widgets in Wijmo Open, we offered to create an extension of Juice UI using Wijmo Open's widgets. By developing alongside appendTo on this project we have also made sure that the Juice UI Framework is extensible so anyone can turn their jQuery UI widgets into ASP.NET Controls & Extenders. We really believe in this practice and hope that it continues to catch fire. You can expect a Beta of Wijmo Juiced coming this spring. In the meantime check out what Juice UI has to offer now. You can also look at our already existing Wijmo ASP.NET Controls. Stay tuned...