Scripting is essential while designing reports because users can provide more functionality in their reports. There is requirement of executing scripts at runtime, such as formatting a field according to its value, or hiding a section if it has no data in it. ​Usage of Report/Application events help in executing scripts either in the scope of application or report. ​Also, scripts ​​throughout a report definition help to retrieve, calculate, display, group, sort, filter, parameterize, and format the contents of a report. ​2015 v2 release of Reports for WinForms will ​take scripting experience in C1ReportDesigner to a new level. Check out Intellisense and Split Mode features in VBScript Editor, coming soon in the week of July 15, 2015.

​​1. ​​As a Report user, I want an intuitive way of writing scripts in Reports so I can code some runtime operations and use Intellisense.

Intellisense is a dream f​or script programmers, making language and Report element references easily accessible. Since you don't have to leave the Script Editor window to perform searches on language and report elements, you can find the information from the Intellisense-suggested functions, insert the language/report elements directly into the code, and even have IntelliSense complete the typing. In addition, ​a help window provides extensive VBScript Content with descriptions of the suggested Properties and Methods.​ C1ReportDesigner adds Intellisense to its VB Script Editor in 2015 v2 Release, a user-requested, powerful feature that will significantly increase the productivity of Report users by providing logical code elements that can be selected from a drop-down in Intellisense while coding. It's designed to make Report creation much easier by automatically generating code in the Script Editor. This process can reduce the time you spend typing and help avoid inserting incorrect scripts and syntactical errors in the report. Following are some of the supported features. 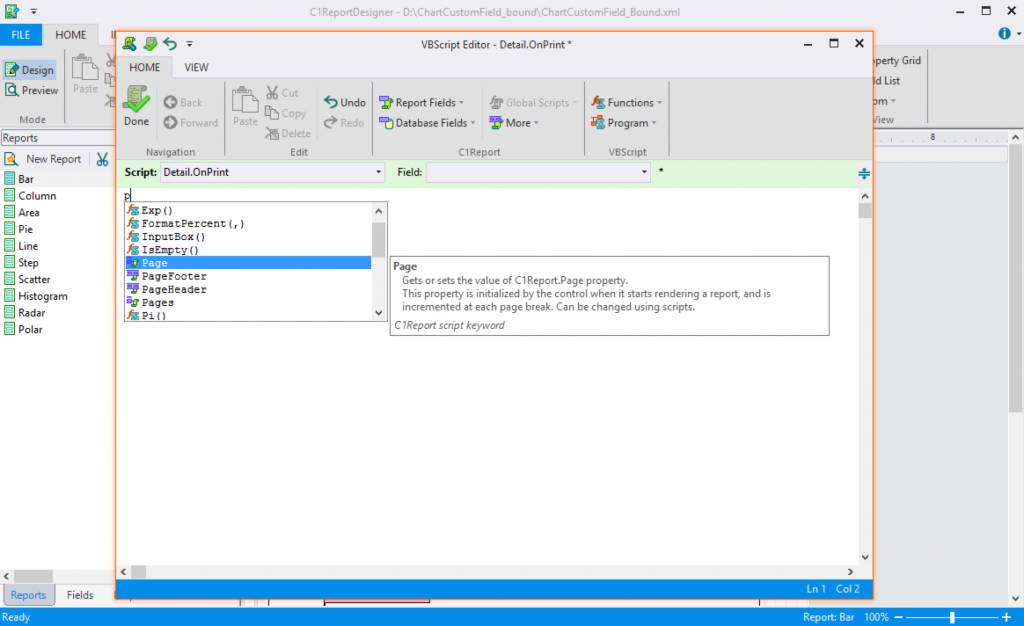 2. ​As a Report user, I want to view two scripts in Script Editor so I can compare both scripts while still coding.

With Reports involving multiple scripts, it becomes difficult to reference other scripts while you're still coding in the Script editor. We've fulfilled this requirement with Split Window Mode in Script Editor, available in the C1ReportDesigner's VBScript Editor in 2015 v2. This mode makes it easy to compare two of the same or different scripts together, using keyboard shortcuts to switch between the ​views.​​ Following are some features of the Split Window Mode supported in VBScript Editor: 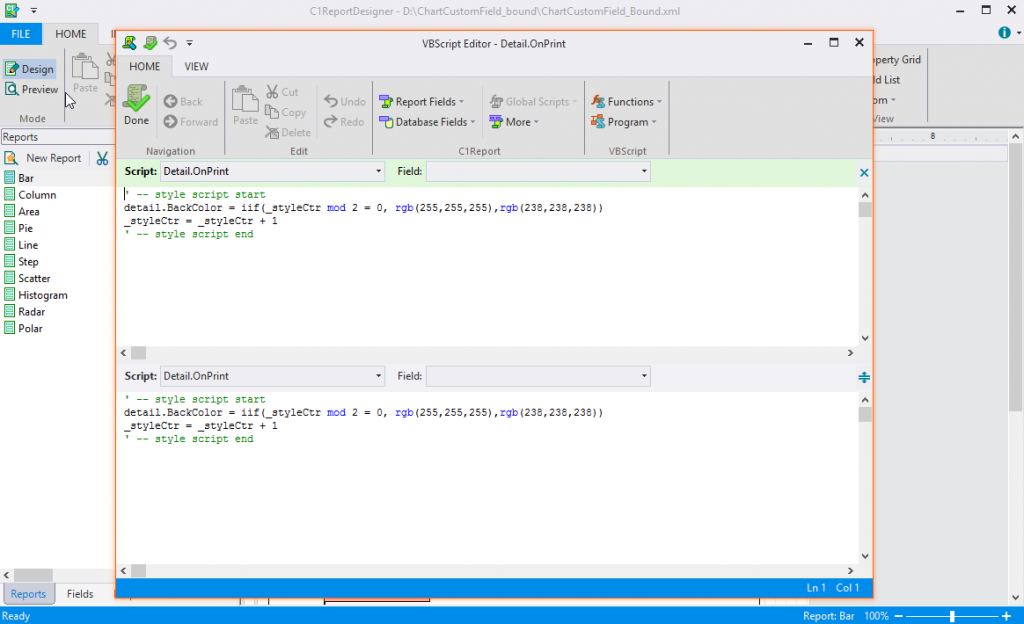