Some time ago I voted on a suggestion for LightSwitch to Support SQL Compact Edition. I recently received a notice that the Visual Studio team had declined the issue, saying:

We already support LocalDB in the development environment in Visual Studio 11 beta. LightSwitch is primarily designed as a multi-user application and we have no plans at this time to support SQL Compact.

This disappoints me greatly. My distaste for SQL Server Express is well known, and Local DB has some issues in VS 11 Beta. SQL Server Compact Edition, on the other hand, is very solid and more than capable of handling the data needs of small to medium sized departments. Plus, in some hosting environments, the in-memory database of SQL CE is more permissible than the traditional server based LocalDB (it doesn't matter that the database services turn on/off only when the LocalDB database is needed, the point is the services exist at all on a client machine or server). I really hope the Visual Studio team reconsiders this down the road. [update] I know, color me confused, too. VS 11 Beta still does include support for SQL CE. 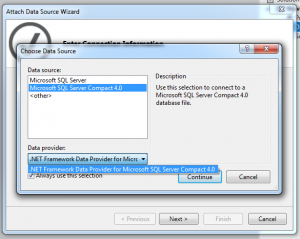