ComponentOne Studio's FinancialChart control comes with built-in support of several technical indicators – ATR (Average True Range), RSI (Relative Strength Index), CCI (Commodity Channel Index) and Williams %R. With the 2017 v1 release of ComponentOne Studio, two more advanced technical indicators (MACD – Moving Average Convergence Divergence & Stochastic) and two advanced overlay series (Bollinger Bands & Envelopes) have been added. In this blog, we'll look at how to take benefit of these newly introduced indicators and overlays to predict and confirm trends. About Technical Indicators and Overlays A thorough price and volume analysis is necessary for the stock market investors to make correct decisions at the right time. Technical indicators and Overlays helps in gaining insight into the supply and demand of securities to identify overbought or oversold levels. They always alert users if any major price action or/and volatility is about to occur in a stock's price. Primarily, there are two types of indicators and overlays:

Indicators are usually rendered in a separate window, while overlays are rendered on top of the chart to give a clear co-relation between the actual price and the predicted price. For demonstration of these technical indicators and overlays in this blog, we will be rendering real stock data of Apple Inc. in ComponentOne FinancialChart control. Stochastic Indicator Stochastic indicator is a well-known momentum indicator built on the basic rule that the momentum or speed of the price changes before price changes itself and in a market trending upward, prices will close near the high, and in a market trending downward, prices close near the low. It measures the relationship between stock closing price and the price range over a specified period and thereafter renders a K line based on these values (default value is 14 trading sessions). D line is rendered based on 3-period moving average of K line. Developer or the end user can customize the input values for calculating K line and D line. ComponentOne FinancialChart control allows you to choose which Stochastic indicator to use – slow, full and fast by letting you specify SmoothingPeriod. The main difference that lies between these three types is sensitivity – fast stochastic is agile and changes direction very quickly in response to sudden changes whereas the slow stochastic takes a little more time to change direction. The chart below visualizes Apple Inc. stock data with Stochastic indicator using ComponentOne Studio's FinancialChart.

Fig 1.1: Financial Chart depicting Stochastic Indicator Stochastics is considered to be the favoured technical indicator for finding overbought and oversold positions as the D line which indicate any major signals in the chart is very easy to perceive and has a high degree of accuracy. D line indicates either the overbought level (over the 80 line) or the oversold level (below the 20 line). The trader should consider selling the stock when the price moves above the 80 level and similarly trader should consider purchasing the stock when the price moves below the 20 level. In the above chart, stochastic gave a clear overbought signal on 21st October and thereafter the stock price dropped from 119 to 107 in next 14 sessions. It also gave clear oversold level signals on 14th November, 7th December, 3rd January and 2nd February and the stock price rose thereafter considerably by 7 points, 9 points, 6 points and 13 points respectively. Moving Average Convergence Divergence (MACD) Indicator Moving Average Convergence Divergence (MACD) indicator is a trend-following momentum indicator and is effective in helping users spot short-term price momentum by following strength, direction, duration and momentum of price of an asset. This indicator renders three additional elements on a chart a MACD series line, signal line, and a MACD histogram:

Fig 1.2: Financial Chart depicting MACD signal line and MACD histogram MACD series line is slower and less reactive to the price changes while MACD signal line is faster and responsible for most of the MACD movements. Positive signal line and histogram indicates that the stock is in uptrend direction and can be bought, while negative signal line and histogram indicates that the stock is moving in a downtrend direction and should be sold. In the above chart, histogram rendered negative value on 1st November predicting the downward movement and the stock price fall from 116 to 107 in next 12 sessions. Thereafter, it rendered continuous positive values predicting a strong uptrend and as predicted, the stock price rose from 106 to 137. Since 1st March, histogram is continuously rendering negative values predicting that the uptrend is over and the prices will start to fall again. Bollinger Bands Overlay Bollinger Bands are widely popular technical analysis overlays created by John Bollinger. This consists of three bands with two of them being volatility bands based on standard deviation, displaying upper and lower limits of the price movement over the time. The volatility bands are rendered above and below a simple moving average and are primarily helpful when prices are trading relatively flat. This overlay renders the following three bands on the chart:

ComponentOne FinancialChart gives you flexibility to define the period and standard deviations for calculation of these bands. The chart below visualizes Apple Inc. stock data with Bollinger Bands Overlay using ComponentOne Studio's FinancialChart. 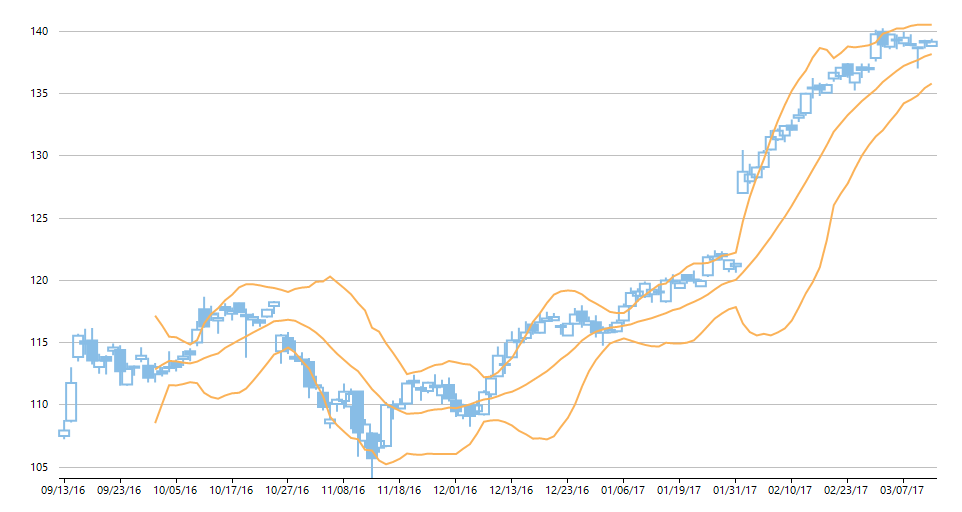 Fig 1.3: Financial Chart depicting Bollinger bands overlay series The lower and upper Bollinger bands are used to identify resistance level in stock price. They depict relative volatility changes through the width of the bands – the wider the bands, the greater is the volatility. Lesser volatility predicts the downward movement in prices, whereas greater volatility predicts the upward movement in prices. In the above chart, less volatility can be clearly seen in October, predicting a decline in the stock price. The stock prices actually declined from October till mid-November when the volatility starts to increase sharply. As predicted, the stock price rose from 119 in December to 141 in March. In the first week of March, the width of the bands has started to decrease (volatility is subsiding), predicting a constant price or reversal from the current uptrend. Envelopes Overlay Envelopes overlay represent percentage based Moving Average Envelopes overlay series for the FinancialChart. Envelopes are primarily trend following indicator but they can also be used to identify overbought and oversold levels when the prices are trading relatively flat. In this analysis mechanism, first, an invisible base line is calculated on the basis of simple or exponential moving average. Thereafter, two envelopes (upper and lower) are rendered with defined percentage away from the base line. ComponentOne FinancialChart gives you flexibility to define the period and percentage for calculation of upper and lower envelopes. Additionally, user can set simple or exponential moving average for the calculation of base line. The chart below visualizes Apple Inc. stock data with Envelopes Overlay using ComponentOne Studio's FinancialChart. 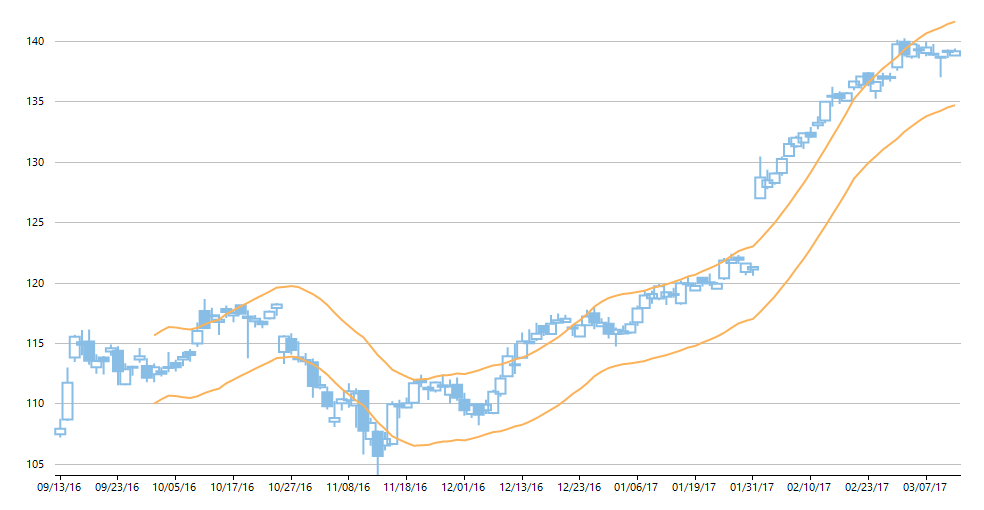 Fig 1.4: Financial Chart depicting Envelopes Overlay series During an uptrend, a breakthrough above the upper envelope is regarded as a sign of strength and the uptrend is likely to continue. Similarly, a strong downtrend is predicted when prices penetrate the lower envelope. In the week starting from 27th October, stock price has penetrated the lower envelope constantly. As predicted, the stock price fall for next 12 sessions. Several constant breakthroughs above the upper envelope can be clearly seen in the week of 12th December. As predicted, the stock price rose from 112 in December to 140 in February. In the month of March, these breakthroughs are hardly visible, predicting that the uptrend is losing its strength and stock price will remain constant or trend reversal might take place. To confirm this, next 2-3 session data has to be closely monitored. Learn more about FinancialChart. Download Technical Indicators and Overlays Sample: WinForms | WPF