The Growth of Major Programming Languages 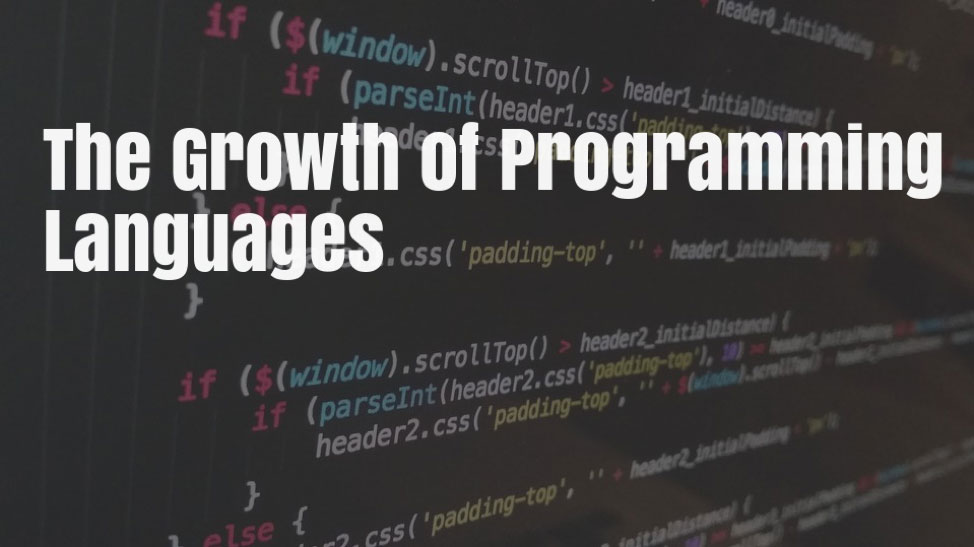 Some of the older programming languages like Java and C++ are popular because they’re heavily used by enterprises in their production machines. C# is still a significant in terms of game development and its association with .NET makes it a viable choice for businesses. JavaScript has seen a surge in popularity after the advent of Nodejs and front-end libraries like React and Angular. Python has had the most extraordinary growth and has evolved as the de-facto choice for machine learning and deep learning. This post will give you insights into the growth and trends of programming languages.

The growth and decline of programming languages

Several languages that were once popular have disappeared. For example, Perl and Pascal (which were mainstream languages in the past) have been replaced with high-level languages with better syntax. Lisp, which was the language of the AI back in 1980s, has branched out into Scheme, Clojure and a few others.

More recent languages like CoffeeScript have lost relevance when ES6 and TypeScript came into existence. 10 years ago, Ruby was hailed as one of the languages you shouldn’t miss. In 2018 , the number of Ruby and Ruby on Rails projects have diminished considerably.

In this article, we’ll explore some of the popular languages that have stayed relevant over the years - Java, JavaScript, Python and C++. This article is also a practical and objective view of the current state, foreseeable future and realistic predictions of the IT industry as it stands in 2018. This can help you make an informed decision on choosing a programming niche that you should spend your time and effort to master. Hopefully, it will also help you launch a successful career as a software developer. As a developer, when you are deciding on your career path, what questions should you ask?

4 questions every developer should ask:

Java is used by almost 90% of the Fortune 500 companies, making it by far, one of the most popular programming languages. One of the reasons that Java is so powerful and popular is captured in its slogan – "write once, run anywhere". Java’s robust Java Virtual Machine or JVM makes this language compatible across platforms.

Some of the more popular career paths with Java include backend developer, embedded systems engineer, big data developer, and Android developer. Most of the Android apps are written in Java and supported by Google’s API which actually resembles JDK. Although Android uses a different JVM, the source is still written Java. Java also has a huge collection of libraries and packages for handling computationally intensive tasks - everything from media manipulation to machine learning.

Java 11, the latest Long-Term Support (LTS) release arrived just recently. Java and all its implementations are so popularly used that you can guarantee it to be around for the next decade and beyond. For instance, Google’s Android API uses something which is similar to Java SDK for creating Android applications. Server-side applications in the financial industry and popular eCommerce platforms are built on top of Spring MVC and other similar Java stacks.

JavaScript is by far one of the leading languages in terms of popularity. According to an annual survey by StackOverflow, 62%+ respondents claim to use the language. It is indeed the dominant language of the internet and its growth over the last decade is a testimony to its popularity. A large part of this can be attributed to the sheer number of web-enabled devices in use today. 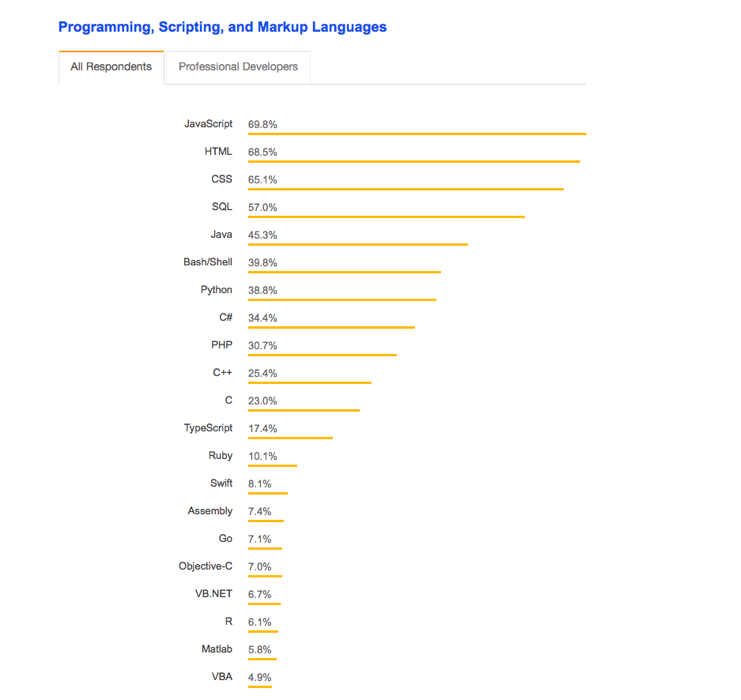 With this statistic in mind, it is highly probable that JavaScript will stick around until modern browsers start supporting another client-side language. JavaScript knowledge is vital for a number of front-end frameworks like Angular, Ember, React, and Vue. It is also useful in Node.js environments where JavaScript on the back-end brings higher efficiency.

According to the report by StackOverflow, 3 of the top 4 popular frameworks of 2017 are JavaScript based. Therefore, if you are among those who enjoy seeing results of your work immediately (like interactive web components) JavaScript is the language for you. It is important to note, though, that a career in JavaScript means that you would need to be comfortable using HTML and CSS – the markup and stylesheet that most web pages are made of.

A major difference between JavaScript and other popular languages is that JavaScript isn’t the right fit for computationally intensive tasks most of the time. However, because JavaScript is predominantly used in the web, you can offload such tasks to other cloud services that offer them as a service.

For instance, manipulating a large number of images & video files on the client-side of a mobile application or browser using JavaScript can create lags unless the code is well optimized. You can instead use a service like Cloudinary or Imgix to move the image manipulation logic to the cloud.

There are also a number of different tools like React Native and Apache Cordova that help with using JavaScript for mobile applications. The hybrid applications created using these platforms let you share the codebase across both iOS and Android platforms. You can also make use of projects like Electron for game development or desktop app development.

A general-purpose language, Python has emerged as one of the most popular and promising programming languages in the last few years. In another StackOverflow’s recent study that focused on high-income countries (those defined wealthy by World Bank), Python was found to be more popular than JavaScript. 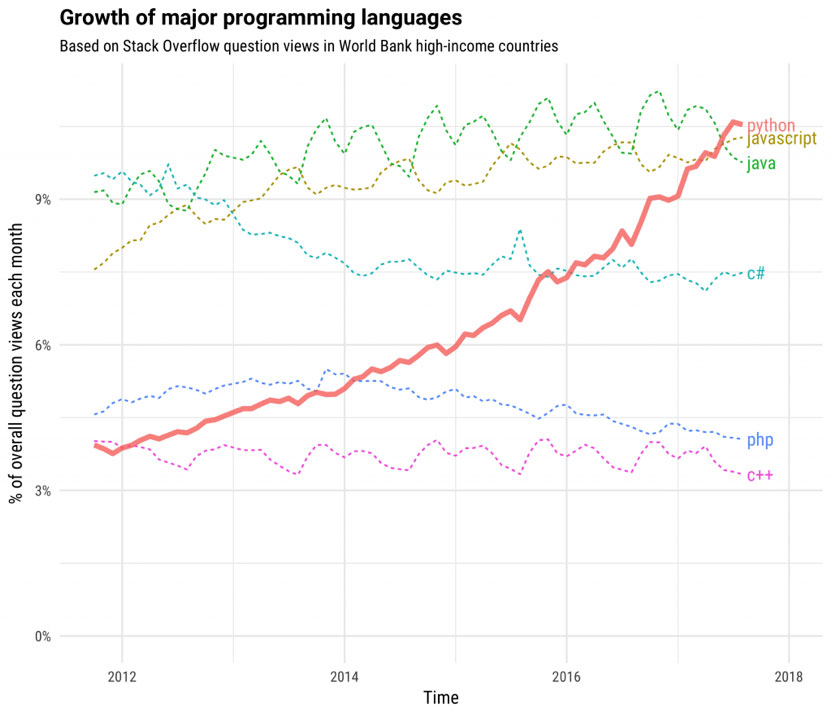 In the modern landscape, Python is used for creating web applications, machine learning, building desktop apps, media tools, network servers, and more. However, the actual reason behind the phenomenal growth of the language is because developers love to use it for web development and data science.

Python is also used by large players including Google, NASA among many others. The Python code is clean, well structured and easily readable. Web frameworks using Python include Django and Flask which have been gaining popularity. The language is also well equipped with good quality machine learning as well as data analysis libraries like Pandas, NumPy, and Scikit-learn.

Overall, a career path with Python tends to be diverse and safe foreseeable future. Python is a good choice for everyone from amateur developers to data scientists largely as it is a high-level language that’s easy to read and understand. Apart from that, Python has got the greatest stack of libraries to get you started with machine learning.

C++, first created in 1985 is an incredibly flexible and efficient programming language. It has consistently remained in high demand largely due to its reliable performance and reliability and also the variety of contexts it can be used in.

There are plenty of large systems that have been developed and managed successfully with the use of C++. These include Microsoft, Oracle, Adobe, and PayPal.

What does a career with the C++ offer? This largely involves the development of desktop applications, focusing especially on performance-intensive tasks. Moreover, most of the popular gaming platforms are built using C++ because it’s still extremely fast. You can include Assembly language code into your C++ code to speed things up. In addition to that, the code is compiled directly to machine code without an intermediate form like that of Java’s Bytecode.

Though a little more complex than the others on the list, once you are comfortable with using C++, you would have a far deeper understanding on how different languages work.

C# is an object-oriented language developed by Microsoft. C# and Visual Studio has helped developers build robust web and desktop applications for the Windows platform. C# brings together the best of two worlds - it offers performance similar to that of C++ and a syntax identical to that of Java. Apart from being used for developing desktop applications and games, it's also heavily deployed by enterprises and large businesses.

Unity Game Engine, for instance, uses C# as its core language and about 34% of mobile games are built on top of this platform. C# could grow further because VR technologies are heavily reliant on this platform. Although desktop applications are not as popular as they once used to be, C# is still a trending language. According to the TIOBE index and the PYPL index, C# is the 5th most popular language on the planet. The above-listed indexes use the search engine data to generate this report, and hence it's fair to say that C# is here to stay for a while.

Choosing a good programming language based on the current trends puts you in a good position of landing in a good development job. Here’s what we think about the 5 languages that we’ve covered in this article.

Java and C++ have been around for ages and they don't appear to be disappearing anytime soon. Most of the corporate world still relies on these languages. Java is still the most significant language used to build Android applications where as C++ powers games built for the console and Windows. They’re here to stay.

C# brings the best of both Java and C++. If you’re into game development, this might be a good language to learn. Looking forward, there is also considerable scope for the language for building VR apps. Apart from that C# is still used by enterprises for their server-side transactions.

JavaScript is the language that powers the web. It won't disappear as long as the browsers continue supporting it. Full-stack JavaScript development is still popular among enterprises and startups. Front-end JavaScript developers usually earn more and hence, libraries like React, Angular and Vue have been trending for a while.

Python was 5th in StackOverflow's list of popular languages back in 2012. But it's still red hot right now. Some of Python's packages, notably Pandas and NumPy have boosted its popularity. If you want to start your career in data science, Python is the best choice going forward. If you love Python's syntax, but your goal is to be a web developer, you should check out either Django or Flask.