Unless you’ve been living under a rock the last few months, you’ve probably heard that Visual Studio 2017 RC is going to be released in November. GrapeCity’s VSIP conference attendees, Brad Keller and Lucas Mays, returned in August with accounts of how Visual Studio 2017 RC would revolutionize the installation process and add crucial productivity improvements. While VS17 isn’t as big of a jump as Visual Studio 2015 was, we’ve been promised key enhancements that will reduce developer friction. 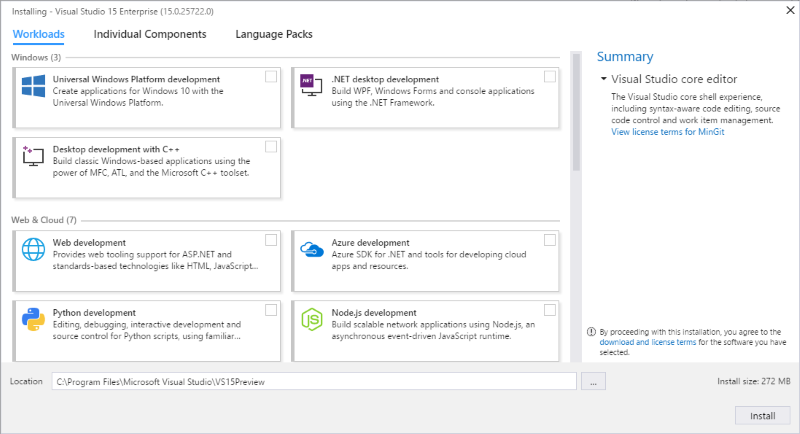 Visual Studio 15 Installation UI Granted, not everyone installs VS every day, so we’re not all going to feel the enormous impact of a better installation on the regular. But if you’re in IT, setting up new machines for developers with some frequency, you’re likely to savor that shorter 50-minute installation time.

The “lightweight solution load” has been much touted as a boon to developers. Here’s what the release notes had to say about it:

Lightweight Solution load enables faster loading of a solution that supports Navigate To, Find in Files, Build, Debug, and single file IntelliSense. It provides an order of magnitude improvement in solution load time and memory usage for large solutions.

The verdict? Developers praised the improved CPU usage and reported that the debugging CPU usage improved quite a bit. That said, the lightweight solution load got some mixed reviews; while they praised the faster solution load, some developers mentioned that when you right-click on a project, there’s a longer pause. So the solution loads faster, but you may have to wait at other moments. Lightweight solution load aside, several developers mentioned that the overall launch time is faster, even without the lightweight version. So you’ll spend less daily time waiting for VS15 to kick into gear.

Here’s a quick list of the favorite productivity improvements from our developers:

The new language improvements were praised by several developers, and one even called them most attractive new features in Visual Studio 2017 RC. We’ll be getting more into C# IntelliSense in another blog, but they also mentioned code conventions and language extensions. A WinForms developer said the pattern matching was “extremely useful.”