Wijmo npm packages have been moved to the @grapecity scope. This brings benefits like multiple module formats available straight out of public npm, and it drastically simplifies Wijmo usage for companies that used to host Wijmo on their private npm servers.

Must be reworked to the following statement that consumes the module from the scoped package:

For the purpose of the smooth transition of your existing applications to the new Wijmo packages, we’ll continue to maintain the non-scoped ‘wijmo’ package for a limited amount of time. This means that the latest Wijmo release versions will be shipped as both scoped and non-scoped packages. But you should schedule an update of your application to use new scoped packages for the nearest time.

At the first glance, it looks like the transition of the application to the new scoped packages could be a nightmare. But in fact, it could take just a couple of minutes to complete this task, using the “Find and Replace in files” feature of modern code editors.

Below we describe the steps necessary to perform to switch your application to the scoped modules use. It uses VSCode as a helper tool, but you are free to use any editor of your choice with similar “Find and Replace” capabilities. You should perform the steps in exact order described below.

which maps to the following lines in the application’s package.json:

This will install all Wijmo packages, but usually your application requires only a subset of Wijmo modules for a specific framework.

For example, you can install only Angular specific packages:

Or if you don’t use any framework, you can install only core pure JavaScript Wijmo modules:

You should perform the following string replacement to update style and theme file imports:

Note that your code can use different quotation marks for module names in import statements, like ', " or `. To manage with this, we use Regex based string replacement, with the following Search and Replace patterns:

This screenshot demonstrates an example of performing this operation:

You should perform the following string replacement to update culture file imports:

For this, perform the same steps as described for styles, with the following search and replace patterns:

You should perform the following string replacement to update JS module imports:

For this, perform the same steps as described for styles, with the following search and replace patterns:

After you performed all the steps described above, build your application to check that the updated code works. 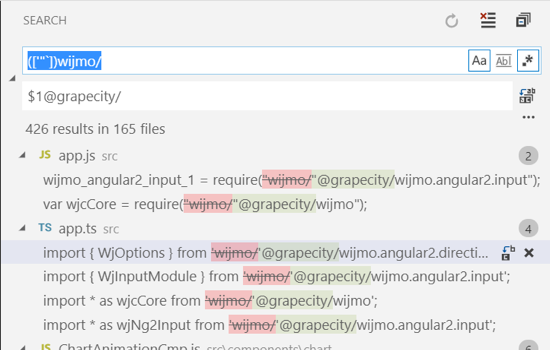 If you have any questions, please leave in the comments below.