For over three years ComponentOne has been developing and selling UI controls for one mobile platform: Windows Phone (years longer if you count Compact Framework 6.5). With C# and XAML as our specialty, we saw a huge opportunity with Xamarin.Forms enabling us to bring our UI components to more developers than ever. As you probably know by now, with Xamarin you can develop native iOS and Android apps in C#. Since Android and iOS are the most used mobile operating systems in the world, we saw it as the best time and opportunity to expand beyond just Windows app development. In October at the Xamarin Evolve conference we announced Xuni, our native, cross-platform mobile control suite. With Xuni we will reach the global mobile app market with powerful UI controls that do more than what is in the box with Xamarin.Forms. Now that the dust has settled a bit at ComponentOne, we are able to announce the official timeline and what’s included in the product. Here are the important dates: Beta Release – January 21st 2015 (Sign up) Official V1 Release – February 18th 2015 What all can you expect in the first release? Naturally, our first focus is always data visualization. We have five new controls all heavily based off our existing XAML controls and Wijmo 5. These include FlexChart, FlexPie, RadialGauge, LinearGauge and BulletGraph. Plus, we have our own cross-platform implementation of the CollectionView that will be included in Xuni. The first release will primarily be focused on Xamarin.Forms development using C# and XAML. This means all of our documentation and samples will be using Xamarin.Forms. The Xuni controls are completely native implementations with Xamarin Bindings and Wrappers, but we won’t target Objective C or Java developers until later in 2015 (see Future Roadmap below).

Data Visualization with Touch and Animation 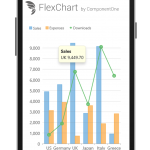 With FlexChart we don’t want to just release another chart with the expected chart types and just some labels like everyone else. We want to really master the mobile form factor and necessary touch-based interaction that comes along with it. The control will have multi-touch gesture support for scaling and zooming, as well as panning and selection on drag and tap. In addition to touch focus, we are also focusing on animation. Animation (both the vivid and the subtle kinds) is key to mobile data visualization. We believe the best mobile visualizations breathe life into the otherwise static apps they reside in, and that is most commonly achieved through subtle animations and effects. You can expect plenty of built-in, yet flexible animation options to be available in the first version. FlexChart is rightfully given the prefix of “flex,” which stands for lightweight, flexible and agile, as has been the case with our FlexGrid controls. But like FlexGrid, the FlexChart features will also be easy to enable and configure, so you can build well-polished dashboards faster than ever before. The supported chart types will include line, area, scatter, column/bar, line symbol, bubble, high-low-open-close and candle. Plus, with automatic tooltip labels that appear on tap, you may not have to do anything but bind to your data source. The FlexPie control is also joining the Flex family as a completely specialized pie chart visualization control. As a separated control we are able to more efficiently deliver the features people expect in pie charts, such as slice manipulation and spinning, without abstracting it from a single chart that can mostly do Cartesian plots. And with our library of gauges you will see an assortment of more modern looking radial and linear indicators compared to our existing Windows Phone offering. These new gauges are modeled after some of the top apps that use visual indicators to present and gather numeric input to and from users.

The first release is focused on data visualization, and so the second release will focus more on data input. You will likely see FlexGrid, a rich tabular datagrid, input editors and appointment calendars in the second release. The third release of 2015 will focus on documents and reporting. In the second release, mid-July, we will also expand our resources to support native iOS and Android developers who are not using Xamarin.Forms or Visual Studio, but rather writing Objective C and Java. We’re excited to finally be bringing you UI controls for all these mobile platforms in 2015, as we continue to also roll out many Studio Enterprise updates for .NET and Windows platforms.

If you’d like to follow Xuni more closely, you can sign-up for the Beta. Those who register will get first access to the controls next month. You can also follow us on our [very new] twitter, @GoXuni, or post your comments and questions to our user forum. Thanks for reading this, but now it's back to work. We have a lot to do! Regards, Greg Lutz (Product Manager)