Comparing WinUI and Its Predecessors

Microsoft created this all-encompassing, state-of-the-art UI framework for desktop apps (MFC, WinForms, and WPF) and UWP Apps and designed it to work for new Windows applications and its predecessors. Its enhanced intuitive features can help get your native applications running quickly or build your app from scratch.

WinUI has improved over the years. There are two versions: WinUI 2 and WinUI 3.

The WinUI 2 library contains UI controls and styles for UWP XAML applications. It consists of a XAML and visual layer built into the Windows 10 operating system and a controls library built on top of the operating system.

WinUI 3 contains the entire UWP XAML codebase plus all WinUI 2’s controls and styles. It also has other powerful layers of Windows technology within the Window 10 visual layers, all wrapped up into a single UI framework.

Let’s look a little deeper into earlier Windows interfaces and see how WinUI compares to its predecessors.

There are several differences between WinUI and earlier frameworks: 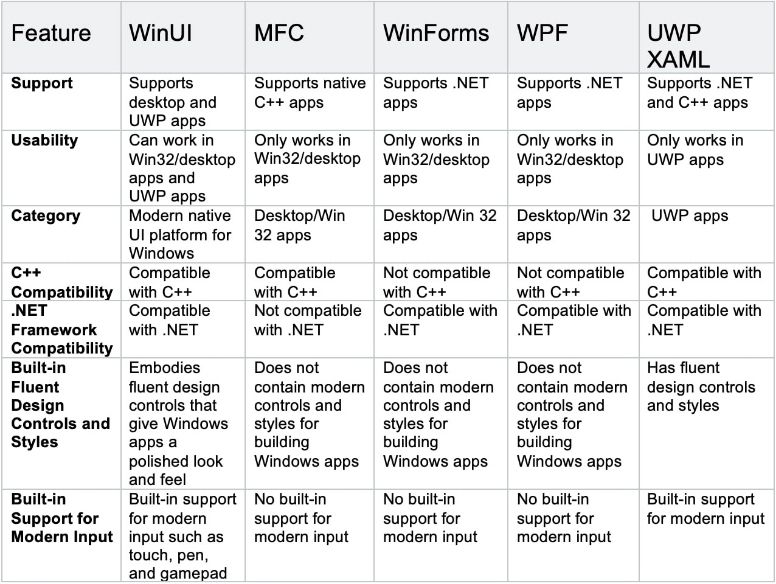 In 1992, we had the state-of-the-art Microsoft Foundation Class Library (MFC). It consisted of native C++ and object-oriented UI frameworks to create Windows apps. This was before Windows’ native UI layer had features such as styles and controls for building Windows applications.

MFC works by providing class instantiation and dynamically translating data structures or objects to store, transmit, or reconstruct later. It also provides the code for basic input and output, managing windows, and storing collections of menus and dialog boxes.

The MFC framework makes programming easy with a set of reusable classes to simplify Windows programming. It provides classes for objects used in basic programming such as strings, files, and standard Windows API and data structures (such as windows and controls).

In 2002, Microsoft released another GUI called WinForms, along with the .NET Framework. Like MFC, WinForms introduced some significant productivity improvements but fell short in replacing MFC because developers can only use it in .NET applications.

WinForms supports HTML text formatting and describes the available HTML formatting tags. This one feature enables you to build a UI to filter your data.

In 2006, Microsoft released the improved Windows Presentation Foundation (WPF) with its myriad capabilities. Aimed at .NET developers, WPF allows Windows to offload some graphic tasks to the GPU using Direct3D rendering. This offloading helps reduce the workload on the computer’s CPU.

Markup implements an application’s appearance declaratively. For example, it designs and fills the appearance of dialog boxes, pages, and user controls with shapes and graphics. Code-behind, on the other hand, is a managed programming language that can be used to implement an application’s behavior.

With WPF, you can create your UI using XAML. Its graphics are vector-based, which makes them scalable, requiring less storage capacity compared to raster images.

Although WPF was the state-of-the-art .NET developer framework for its ease in developing desktop applications, it did not replace the WinForms GUI framework because it did not focus on UI.

As of 2006, we had three great UI frameworks for building client applications, suitable for Windows developers with differing preferences and goals. Then, in 2012, Microsoft released Windows 8 with another GUI framework: Universal Windows Platform Extensible Application Markup Language (UWP XAML). This framework helps developers produce any kind of app, sometimes called a Metro or Store app.

Microsoft built UWP on the latest graphical engine, and developers can use it in C++ and .NET, but there are limitations. For one, UWP XAML only works in UWP apps, which are different from apps produced by frameworks such as MFC, WinForms, and WPF.

While apps built with MFC, WinForms, and WPF are called desktop or Win32 apps, apps built with UWP are called UWP apps. They have different sets of APIs and different library ecosystems. For example, a Windows developer who uses MFC, WinForms, or WPF may decide to use UWP XAML. They would have to build a strictly UWP app since UWP XAML only works in UWP apps. As a result, this deters some developers.

The UWP framework uses Windows Runtime (WinRT) APIs to provide powerful UI features and it’s distributed alongside Windows update to take your application to the next level. UWP works by using a virtual registry and system files to not conflict with other apps.

It also enables apps from the Appx package to be easier to remove and update seamlessly to add new features to already installed apps. Before UWP can access any hardware such as microphones, webcams, or an entire file system, the user must grant access, making it difficult for malicious apps to cause damage.

Based off our popular WPF controls, we've developed similar controls for the UWP platform, which you can check out here.

Unlike UWP, which is only compatible with Windows 10 devices, WinUI is backward-compatible with earlier versions of Windows 10 and 11. For example, with WinUI 3, you can build and ship apps with new features without waiting for users to run the latest Windows update.

Furthermore, WinUI is a highly optimized, thoroughly-tested native Windows UI platform and is broadly available for developers to use. It also makes it easier to build apps because it adapts automatically to a user’s operating system version.

Fundamentally, most apps built with the WinUI framework are UWP apps at their core. Both frameworks share the same base visuals, the same fundamental Windows API, and the same XAML model.

Although the underlying API logic for both WinUI and UWP is C++, developers using these frameworks can choose from a wide range of programming languages when building Windows apps: C#, C++, F#, Visual Basic .NET (VB.NET), and JavaScript. (We'll talk about this in a later section.)

Despite all these similarities between WinUI and UWP, they do have differences. UWP, for example, is distributed with Windows, making it mandatory for users to update to the latest Windows version to access fixes, improvements, and new UI controls.

This need to update is a bit of a bottleneck for users who cannot constantly update to the latest version of Windows. Microsoft designed WinUI to solve this problem. It’s decoupled from Windows and with an API extracted from UWP, so updating is easier.

These two frameworks can combine to build awesome apps. Developers can use WinUI 2.x to create UWP applications. Since UWP is distributed in Windows, WinUI and UWP can work together to add features like XAML Islands to your existing desktop applications.

One of WinUI’s many features is its backward compatible Windows Creators Update. WinUI also includes React Native for Windows. It’s just like React but differs in its use of native components instead of web components as building blocks.

As a new feature of WinUI, React Native enables you to create new or upgrade existing apps without learning or using new code. You can package and deploy these JavaScript apps through the Windows Store. Its features include automatically linking native modules, better-theming support, and a navigation menu.

React Native supports both Windows 10 SDK and macOS 10.13 SDK. Developers can use JavaScript to build native Windows apps for devices supported by Windows 10 and the macOS desktop and laptop ecosystems.

Benefits of Developing with WinUI

Let’s explore some benefits of building apps with WinUI compared to other frameworks.

Although WinUI is an improvement over older frameworks, it does have some disadvantages. For one, WinUI cannot run or be deployed on Windows 7 without the Uno Platform, unlike WPF apps.

As well, when compared to WinForms, WinUI has a less-deserved reputation for rapid UI development. For example, many Windows developers still revert to WinForms when creating a simple utility or UI test harness for a .NET library.

WinUI is the latest in a long line of GUI frameworks. The core difference between WinUI and earlier frameworks is the access to fluent design and updated controls without requiring an updated SDK. Although it has a couple of disadvantages compared to older frameworks, many developers have switched to WinUI for its flexibility, backward compatibility, and universality.

If you switch to WinUI, you can still save development time with GrapeCity ComponentOne’s suite of .NET components (available for WinUI as of mid-2021). Quickly add compact and flexible data grids, charts, reports, calendars, inputs, business intelligence dashboards, and other UI elements to your WinUI application to enhance user experience with familiar controls.