One of the most exciting new features we have added to SpreadJS is a new improved file format. This new file type can greatly improve the performance of importing large Excel files while also crating a smaller, better optimized file when saving.

The new .sjs file format works by bypassing the previous need to first export to SSJSON and now translates the data directly to the model. The resulting data is saved to a zipped .sjs file with smaller SSJSON files, making it similar to Excel’s own XML structure. This format now makes the ExcelIO process much faster and smaller.

For more information about this feature, check out the blog here: New JavaScript Spreadsheet File Formats in SpreadJS v16

TableSheets now support hierarchy data in the source data. This includes 4 different types of data for records with:

Hierarchy operations have been added as well, giving users the ability to:

The data source schema for the Data Manager now supports setting an alias for columns, allowing for different names between the front-end and back-end of a data source. This can be done by simply setting the “Caption” property when adding a view to the Data Manager.

We have made a few enhancements to the Designer Component for SpreadJS, including some of the corresponding features from the previous TableSheet section in this blog:

When TableSheet was originally added to SpreadJS, we included a panel to manage TableSheets in the Designer. When working with relationship data in the column list, specific columns can now be collapsed. In addition, relationship columns can be clicked on to show the details for that specific column. This functionality also works for the TableSheet Panel that shows on the right side of the Designer when selecting a TableSheet in the workbook. Additional features include grouping and dragging fields around.

Work in the Designer TableSheet Documentation

Another enhancement to the TableSheet implementation in the Designer is the addition of support for hierarchical data in the Columns tab of the Data Source. Columns now have a separate “Hierarchy” section with things like Type, Summary Formula, and Outline Column that can be defined: 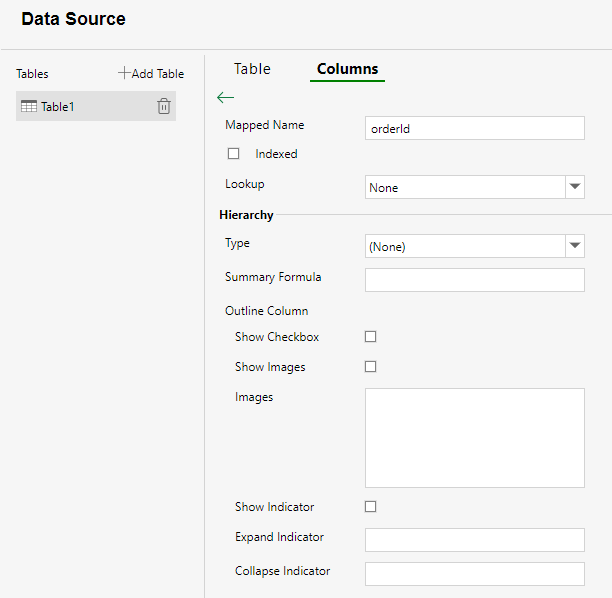 These options can be used as follows:

The new Format Pane button lets users easily open up the existing side panels for Shapes, Pictures, and Charts.

SpreadJS automatically recognizes invalid formulas, and shows an error when a user tries to submit one. However, the formula would also be removed if it was invalid, and with this release we have enhanced this behavior to keep the formula in the cell but instead convert it to text if the AllowInvalidFormula option is set to true:

With this enhancement we have also added a cell state specifically for invalid formulas. This means that you can mark cells that have invalid formulas and apply styles to those specific cell.

To make it even easier to create your own forms within SpreadJS, we have added some useful Excel-Like form controls based on SpreadJS shapes. These controls include:

These controls can be placed anywhere in the worksheet by specifying the left, top, width, and height parameters of the addFormControl method that represent the location and size of the control. Once the location and size are set and the control is created, it can be bound to a specific cell, such as the age spin button from the screenshot above. In addition, a new event called FormControlValueChanged has been added to fire whenever the value of a form control changes (either UI operation, API call, or associated cell changes).

Developers can now restrict or allow different types of shape resizing. These types include aspect, horizontal, and vertical resizing, and can be simply set using the API “allowResize”.

When allowResize is set to true in a sheet, the shift key can be held down while resizing a shape with the mouse to retain the shape’s aspect ratio.

We have made a few enhancements to the basic workbook functionality of SpreadJS:

The events for copying and cutting have been enhanced to provide the current state of the clipboard. This can help with implementing specific functionality during certain stages of the copy/cut/paste process with additional arguments added to the following events:

Use Events when Clipboard Changes Documentation

Our style implementation has been enhanced to include cell decoration. This includes:

Data validation is useful to mark data as incorrect or prevent entering of specific data. Styles could be set of that validation, but for this release we have added the ability to set custom styles for the data validation.

The EditEnding and EditEnded events occur after a user has entered or changed data in a cell. With the v16 release we have added a cancel parameter so that the edit can be cancelled if needed by the developer.

These are many of the new features that we added to SpreadJS in v16. Be sure to check out our demos and documentation for more information on these features, and download a trial of SpreadJS to try it out for yourself!