The SpreadJS V15.2 (Service Pack 2) update has just been released, and with it comes some great new features and other fixes.

This blog will introduce several new features and how they can help benefit and enhance your JavaScript applications.

Be sure to try out all these features in our demos, and download a trial of SpreadJS today!

The Name Box component of SpreadJS is used to display selected ranges, items, and named ranges. It creates and navigates to custom names within a spreadsheet. The name box has a few functionalities:

This functionality is already present in the designer, but with this release, we have separated it into its own component that can be used separately without the SpreadJS Designer.

With this release, we have added a new cell type to help with the data presentation in the form of a DataObject Cell Type. This means that you can have special cells bound to data, and selecting different properties of a data object is really easy. When a cell value is an object, and the cell type is set to DataObject, a cell button will automatically be added to the cell:

Upon clicking this button, a drop-down will open, and if the cell value is a nested object, there will be a cascaded drop-down list: 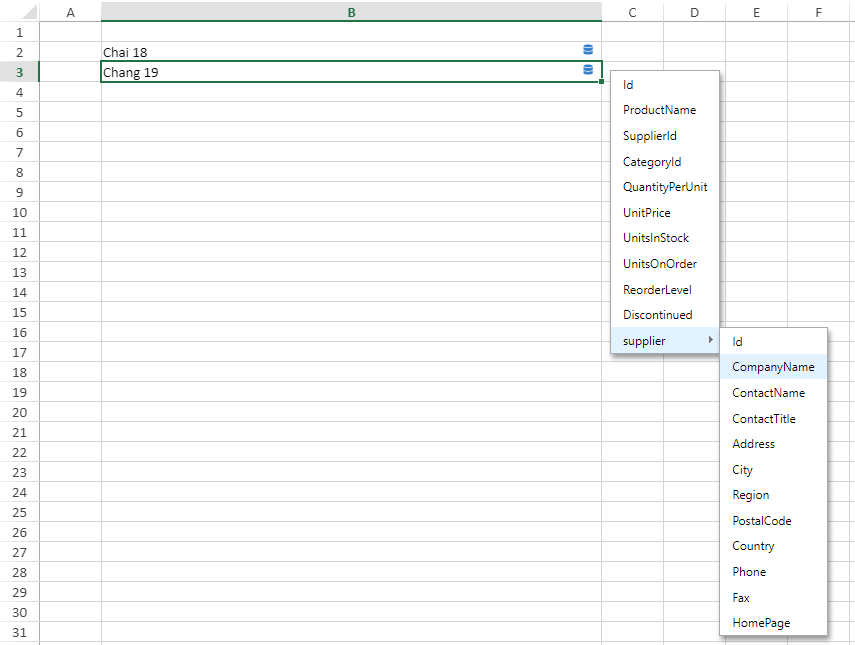 When a user chooses an item from that list, the selected item value will be extracted and displayed in adjacent empty cells to the right:

When we first implemented slicers in SpreadJS, they were made using DOM elements. With this release, we have enhanced the slicers to be built using shapes, allowing us to implement even more easy-to-use slicer features, such as Table Slicer Multi-Select, and others.

This customer-requested Excel feature adds a multi-select option to the Table Slicer. This feature allows customers to select certain items in a table slicer instead of just one or all items.

This enhancement focuses on navigating selected cells. Previously SpreadJS would cancel a selection when selecting multiple cells, entering data, and then pressing enter to move to the next cell. We have changed this to match Excel behavior, so the selection now does not get removed:

Previously, you could define a hover style for cell ranges in a sheet so that when a user hovers over that row, it shows a single style:

With this enhancement, it is now possible to set different hover styles for multiple ranges:

The InvalidOperation event fires when specific invalid operations are performed by the user, such as:

This event will now fire for a few more invalid user interactions:

The picture functionality of SpreadJS currently supports many features, including borders, background colors, and stretching. With this release, we have added even more picture customization options, including: 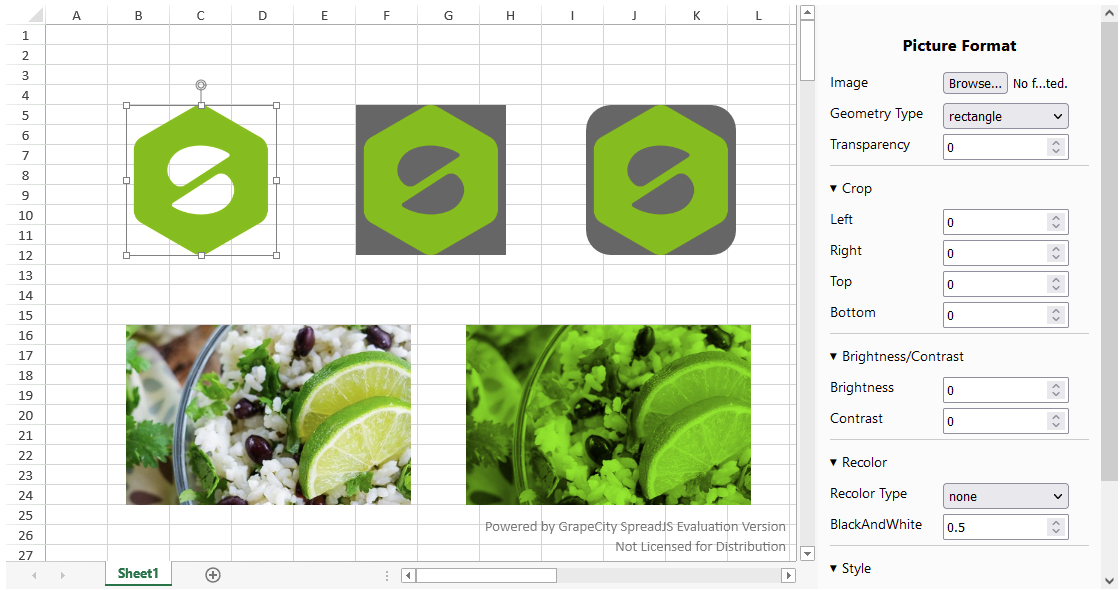 Cross-Workbook formula support was added in the first service pack release of v15. With this release, we have added more information about the source and target references in the form of the new includeItemDetail parameter of the getExternalReferences function, which allows a developer to get the specific target row, column, and source ranges of a specific file to know exactly what cells that specific references are coming from.

We have added some new Excel functions to SpreadJS.

We have also implemented a formula that helps with displaying object relationship values. For example, say you had an object called “Customer” with the following properties:

You can now reference these individual items in a cell by using syntax like this:

Updating Data without a Page Refresh

In our original implementation of TableSheet, a page would need to be refreshed to update the TableSheet from a connected data source. With this release, the data can be updated without refreshing the page through a new fetch method at the DataManager Table and View levels. Calling this will fetch the data from the data source and update the related TableSheets.

We have now added a getChanges method to fetch the items programmatically in a TableSheet that have changed. This new method returns an object array that has the following information:

SpreadJS TableSheets now support saving a template without including the TableSheet data, then loading that data at a different time using the table’s fetch method described above. This lets the developer create a TableSheet without specifying the data initially but then load the data at a later point, such as when that data changes. This would look something like this:

By default, cells within PivotTables in SpreadJS can’t be edited, only Pivot ranges, just like Excel. With this release, end-users can now edit PivotTable cell values and then update and reload the data source of a PivotTable to reflect the changes. For the developer, this is enabled with a property called pivot.EnableDataValueEditing.

SpreadJS now includes support for the latest version of both React 18 and Angular 14.

These were many of the new features that we added in the v15 service pack 2 release of SpreadJS.

Be sure to try out all these features in our demos, and download a trial of SpreadJS today!